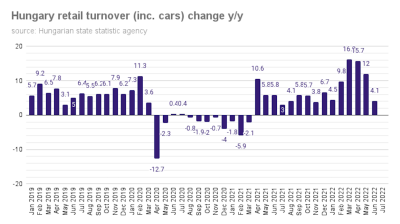 Retail sales growth in Hungary slowed to an annual 4.1% in June from 12% in the preceding month (chart), reflecting a change in consumer habits after the government announced austerity measures to fill in the budget gap and inflation galloped to a 20-year-high. Adjusted for calendar year effects, retail sales increased by 4.5%, below analysts’ expectations of 8%. On a monthly basis, retail sales fell for the third straight month, down 0.5%.

Hungary’s retail sector kicked off the year on a strong note, boosted by massive pre-election fiscal transfers and wage hikes. Months before the election, families received a tax refund, pensioners a 13th-month pension,  a bonus payment for armed personnel was paid out in February, and the minimum wage was increased by 19%, which led to double-digit growth in the sector between February and May.

Food and non-food sales contracted on a monthly basis, down 0.25% and 3.6% respectively.

The June retail data signals a further slowdown ahead for the sector in H2, which is bad news for the economy as consumer spending was a major driver in Q1 GDP growth of over 8%.

Rising inflation has erased much of the real wage growth and the 25% rise in food prices is increasingly holding back consumption, Erste Bank said in a note. The low base and the phasing out of petrol tourism have also reduced fuel sales and retail sales in general.

ING Bank analyst Peter Virovacz pointed to a second consecutive monthly contraction of food sales and the slowest growth in non-food sales on an annual basis since the pandemic, which signals that Hungarian consumers are adjusting to rising inflation and austerity measures. This could be seen as the trend ahead of a recession, but it is too early to say, according to Virovacz.

Hundreds of thousands of households will pay the market price for gas and electricity above the level set by the government as the national average, which many analysts say is too low as it includes empty homes, cottages and summer dwellings.

The meltdown in household demand is one of the main reasons why Hungarian economic growth is set to slow spectacularly in H2, and the possibility of a technical recession is not ruled out, business portal Portfolio.hu commented.