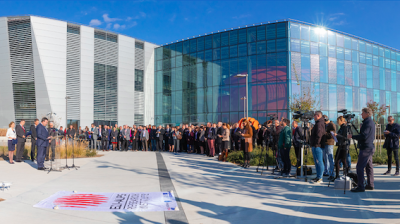 Super laser research facilities in Hungary and the Czech Republic will form a European Research Infrastructure Consortium (ERIC), which is expected to start operating in January 2020, it was announced on July 15. Italy is expected to join first, and a number of other countries, such as Germany, France, and the UK, are also interested in the ERIC.

The Extreme Light Infrastructure (ELI) is the world’s first international laser research infrastructure. The project consists of three giant laser facilities in the Czech Republic, Hungary, and Romania set up from funding from member states and the use of EU structural funds (ERDF)

It aims to host the most intense beamline system worldwide, develop new interdisciplinary research opportunities with light from these lasers and secondary radiaton derived from them, and make them available to an international scientific user community. It is the first project of the European Strategy Forum on Research Infrastructures (ESFRI) to be fully implemented in the new EU member states.

On Monday Hungarian Innovation and Technology Minister Laszlo Palkovics discussed the future of the project at a meeting with Czech Deputy Prime Minister and Minister of Industry and Trade Karel Havlicek in Prague.

The parties also discussed opportunities for bilateral cooperation in the areas of energy, innovation, and modern technologies.

The project was officially started last year and the three sites become some of the world's foremost high-power laser user facilities.

The most advanced of these research centres is located in Dolní Brezany. It was built in a joint EU and Czech funded project worth €10bn. It was the largest single investment in a research and development facility in the country.

The building houses around 100 Czech and foreign scientists who are currently finalising their L4 laser, which should be capable of firing a 10 petawatt laser beam.

The Czech arm of the project was the first of the three sites to begin real research work. The facility mainly focuses on the development of short-pulse secondary sources of radiation and particles.

The Hungarian laser facility was inaugurated in 2017 from a HUF80bn (€245mn) investment in Szeged, southern Hungary.

The potential IPO could be worth $2.3bn-3bn, which would put Allegro’s valuation at some $11bn, making it the biggest IPO on the WSE since the 2010 debut of state-controlled insurance company PZU.

Shuttle bus taking passengers to Jelgava Post Island should halt as soon as it detects the smallest obstacle in its path - but officials warn against standing in its way to find out if it really will stop in a timely fashion.