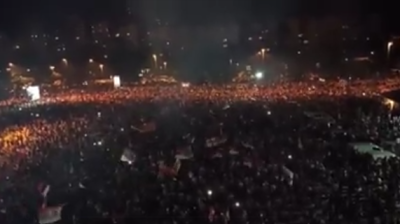 Thousands of Montenegrins gathered in the capital Podgorica and in several major towns on the night of August 31 to celebrate the victory of the opposition in the general election the previous day. The rallies were largely peaceful though some clashes with supporters of the Democratic Party of Socialists (DPS) — that has ruled Montenegro for three decades — were reported in Podgorica.

Although the DPS will be the largest party in the parliament after the August 30 vote, it cannot form a ruling coalition as the opposition is set to take 41 of the 81 seats in parliament and the various parties and coalitions have already expressed their willingness to set aside their differences in order to oust the ruling party.

The DPS has taken 35.06% of the votes, the state election body, DIK, announced after counting 100% of the votes. However, its main rival, the pro-Russian and pro-Serbian coalition For the Future of Montenegro, is a close second with 32.55%.

As well as the crowds on foot, opposition supporters drove through the capital Podgorica to celebrate their victory, waving Serbian flags, videos broadcasted by news outlet CDM showed.

There were reports about clashes between supporters of the opposition and DPS, with protesters reportedly throwing stones at each other. However, the police kept the situation under control.

The coalition which came second in the election – For the Future of Montenegro – comprises pro-Serbian and pro-Russian parties. However, on August 31 its leaders said they are willing to continue Montenegro’s foreign policy obligations, including the reforms needed for EU membership.

In Podgorica and other towns, supporters of the opposition also gathered in front of Serbian Orthodox churches to celebrate.

Many Montenegrins have commented that the Serbian Orthodox Church secured the victory of the opposition.

The DPS’ popularity has suffered as a result of the months-long crisis provoked by the adoption of the controversial law on religions at the end of 2019, which has led to protests, rallies and escalating tensions with Serbia and the Serbs living in Montenegro.

The church law, according to its critics, may strip the Serbian Orthodox Church of hundreds of religious sites in Montenegro, including medieval monasteries and churches. This has led to numerous protests in Serbia and in Montenegro.

In the last few weeks, many Montenegrin citizens expressed their support for the Serbian Orthodox Church and their displeasure over the adoption of the Law on Freedom of Religion, as the authorities also banned liturgies and gatherings around shrines due to the coronavirus pandemic.