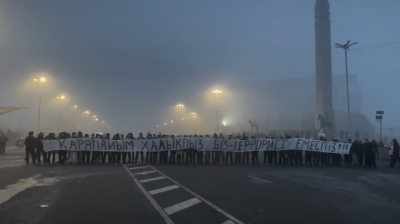 The unrest included peaceful demonstrations that may have been broken up with excessive, or even lethal, force. / Screengrab, HRW video.
By bne IntelIiNews January 26, 2022

Emphasising the “urgent need for an effective, independent and impartial investigation”, HRW noted in a lengthy breakdown of its findings that unacceptable levels of force included instances of shooting at protesters and rioters. During the unrest, on January 7, Kazakh President Kassym-Jomart Tokayev said he had issued a shoot-to-kill order. HRW responded by urging him to immediately rescind it, saying it could lead to unlawful killings. The official death toll from the week of protests and riots stands at 227, with 19 members of the security forces recorded as among those killed.

HRW said it analysed more than 80 verified videos recorded between January 4 and 6 in Kazakhstan’s largest city, commercial capital Almaty. The worst of the four assessed incidents led to 10 apparent killings and 19 injuries. “The full toll is likely higher, both in this case and in others in which security forces used excessive force,” HRW said.

“There is ample evidence showing that security forces opened fire without any apparent justification and killed at least 10 people,” said Jonathan Pedneault, conflict and crisis researcher at HRW. “The death toll from the violent crackdown is likely much greater and requires a prompt and effective investigation.”

“Dozens of grieving families across Kazakhstan are waiting for answers from their government,” Pedneault added. “It should be a priority for Kazakhstan to restore some measure of confidence in the rule of law and ensure that all those responsible for this tragic loss of life are held to account.”

HRW said it verified and analysed over 80 videos, the majority of which were recorded by participants or witnesses to the events in Almaty between January 4 and 6 and shared on Telegram, Twitter, Facebook, or YouTube. “Nine of them were recorded by Agence France-Presse journalists and one was posted online by the Kazakh government. A local journalist sent another video directly to Human Rights Watch,” HRW added.

HRW matched landmarks in the videos with satellite imagery, maps and photographs to identify the locations where the videos were recorded. It established a chronology by comparing footage with media reports and social media posts, sunset and sunrise times and times shown by clocks that were seen in recordings. For the analysis of events on January 6, HRW also spoke with three witnesses, two protesters and a journalist.

INCIDENT 1: “In the first incident, 17 videos recorded on late January 4 and early January 5 show peaceful protesters walking to and gathering in Almaty’s Republic Square, close to city hall and the president’s palace. Small groups within the crowd appear to be looting from stores on their way to the square. Around 12:15 a.m., shortly after the protesters arrived, security forces forcibly dispersed them with teargas, stun grenades, and rubber projectiles. “Afterward, a crowd began to attack security forces and set fire to police vehicles.”

INCIDENT 2: “In the second incident, a series of 23 videos recorded between 3 and 5:30 p.m. on January 5, shows that security forces protecting the president’s residence repeatedly fired with assault rifles at several hundred people outside the building, including protesters and others holding sticks, shields, and spades. “The people did not appear to be posing an imminent threat to security forces, though one person might have been holding a handgun. From this footage, Human Rights Watch counted at least 10 people who appear to have been killed and 19 injured, most of them apparently by bullets.

“That night, in a televised speech, President Kasym-Jomart Tokaev referred to the protesters and rioters as ‘terrorist gangs […] who have undergone training abroad.’ He did not elaborate or offer evidence for his claims at the time, or since.”

INCIDENT 3: “In the third incident, a video showed soldiers shooting live ammunition in Republic Square around 10 a.m. on January 6. A protester who was present at the time said that she and about 150 others were peaceful and shouted ‘Don’t shoot’ prior to security forces firing into the air. She said one man was injured, which local media also reported.”

“A protester present at the time told Human Rights Watch that he saw security forces fire warning shots prior to directing live fire at the protesters and then ran for his life. The protester who was on the square earlier and the journalist said they had left the square minutes before but heard the shooting. Witnesses who spoke to the journalist said they saw one protester hit in the head and another wounded in the upper body.”