HOMANS: Putin's Epistle to the Ukrainians 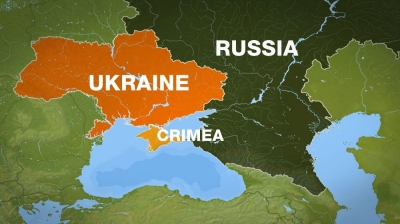 Russian President Vladimir Putin wrote a 5,000-word essay on Ukraine's relationship to Russia where he argued in detail and with historical "evidence" that Ukraine is a Soviet construct and not a "real" country.
By Robert Homans in Washington DC July 20, 2021

On July 12, Vladimir Putin, President of the Russian Federation, released an epistle entitled "On the Historical Unity of Russians and Ukrainians." Wikipedia defines "epistle" as "a writing directed or sent to a person or group of people, usually an elegant and formal didactic letter." The Epistle appears on the Kremlin's website, in both Russian and Ukrainian.

Putin's Epistle to the Ukrainians is not the first time that he has argued that Ukrainians and Russians are “one people,” or railed against unwanted Western Influence on Ukraine, foreign threats against Russia, and his view of Ukraine as a country. One can go back at least as far as February 10, 2007, when Putin gave a speech to the Munich Security Conference. In his 2007 speech, Putin criticised Nato's eastward expansion, the placing of anti-ballistic missiles in Poland and the Czech Republic, the malign influence of Western non-governmental organisations in Russia, and even election interference. I suggest reading Putin's Epistle and his 2007 speech consecutively.

Over the nearly 14 and a half years, since his 2007 speech at the Munich Security Conference, Putin has substantially maintained his views concerning external threats to Russia's security and Russia's authority over what he calls Russia's "Near Abroad," including Ukraine. The only difference between the Epistle and the 2007 speech is the Epistle’s emphasis on Ukraine. While the Epistle is more specific concerning Putin's views about Ukraine, it also contains important additional insights about Putin's historical views, including:

An excellent analysis of the Epistle is Leonid Bershidsky's article in Bloomberg, entitled "Why Ukraine Lives Rent-Free in Putin's Head." Bershidsky describes the Epistle as a "deeply conflicted tortured work."

In his article, Bershidsky compares Putin's thinking to that of Adolf Hitler, stating: "Putin rails against what he sees as Western support for Ukrainian "neo-Nazis" and the hero-worship of controversial nationalist figures from Ukraine's past, such as Stepan Bandera, but the entire narrative of the "Anti-Russia project" sounds uncomfortably like Adolf Hitler's March 15, 1938 speech in Vienna, announcing the Austrian Anschluss.” In this speech Hitler said: "the task of the so-called independence of Austria, grounded in peace agreements and dependent on the mercy of foreign powers, was to impede the construction of a truly great German Reich and thus to block the German people's path into the future."

Now that Putin has clearly described the nature of his "deep conflict" over Ukraine, the West needs to do both the following:

For Putin, the West doing neither of the above will be a signal that he can resolve his “deep conflict” over Ukraine, without limitations, with only manageable responses from the West.

Ukraine has proved that it will continue to fight to defend itself, without continued assistance from the West. In 2014 and 2015, Ukraine rebuilt its armed forces and stopped Russian advances in Donbas. Ukraine accomplished both without substantial Western military support.

Today Ukraine is raising the potential cost to Russia of further military action. Ukraine is taking delivery of Turkish surveillance and attack drones, identical to the drones that were so effective in destroying the Armenian army, a client of Russia. Ukraine is deploying the Neptune anti-ship missile, a weapon of its own design. As Ukraine is allowed to do under the agreement with the US governing the delivery of Javelin anti-tank missiles, Ukraine is now deploying those missiles to positions near the Line of Contact between free Ukraine and the two "People's Republics," Donetsk and Luhansk. During the past seven years Ukraine has constructed very strong defensive positions along the Line of Contact. Ukraine has had over seven years to train partisan groups.

Ukraine has proved that joining Nato is not a necessary condition for the country to successfully defend itself. However, Western support, at a level that is credible to Russia, is essential to help Ukraine prevent Putin from acting on his personal conflicts that he so vividly describes in the Epistle.

EU Member states' arguments about not inviting Ukraine to join the EU centre on corruption and money. The argument often put forward includes:

Concerning whether Ukraine is still too corrupt to join the EU, the Epistle changes the calculus. In Putin’s mind, this argument is evidence that, in the end, the EU would rather not have Ukraine be a part of Europe. Concerning the cost to the EU of Ukraine joining as a full Member, this almost certainly relates to the fact that, once an EU Member, Ukraine would be freely able to provide the rest of the EU with low-cost agricultural produce.

Ukraine is now in what Ben Aris, editor-in-chief of bne Intellinews, calls the EU's “perpetual waiting room”, even though, unlike many of the more powerful EU Member States, including those states most sceptical of Ukraine’s readiness to join the EU, Ukrainians have fought and died to preserve European Values. Ukrainians began fighting for European Values on December 30, 2013, at the start of the Revolution of Dignity. Ukrainians have been continually doing so ever since.

In the meantime, equivocation about Ukraine joining the EU, combined with the West showing insufficient support to help Ukraine defend itself, at least in Russia’s mind, only increases the likelihood that Putin will attempt to resolve his inner conflict that Bershidsky described, at an incalculable cost to Russia, Ukraine and the West at large.

Russia's exceptionally strong current account surplus helped the ruble outperform its peer currencies in 3Q21 and is likely to keep doing so in 4Q21. As a result, we see USDRUB appreciating to 70.0-71.0 in the coming month.

STOLYPIN: It isn’t the ‘Usual Suspect' who is really 'weaponising gas'

That naughty Vladimir Putin is up to his tricks again. Not weaponising football hooligans or COVID vaccines this time, but gas. Politicians are queuing up to blame Russia. The trouble is, this is not just bad analysis but also bad politics.

ING: Winter is coming… and so is further volatility for energy markets