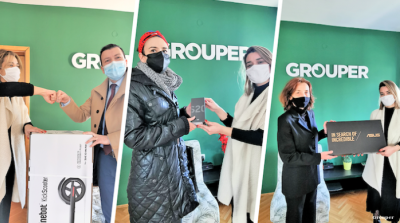 Grouper was set up as a startup by North Macedonia’s ex-finance minister Nina Angelovska in 2011. / Grouper
By Valentina Dimitrievska in Skopje September 18, 2022

Meanwhile, Bloomberg Adria reported on September 14 that it has information that Ananas E-commerce, owned by Delta Holding, is buying Grouper. Reportedly, it has already informed Serbian Commission for Protection of Competition about the concentration.

Ananas (pineapple) E-commerce is part of Serbia’s Delta Holding, founded by controversial businessman Miroslav Miskovic. Grouper (grouper.mk) was set up as a startup by Angelovska in 2011.

“For us, the customer is king, and every good online shopping experience is a big deal for us. Our journey starts from Serbia, through Bosnia and Herzegovina, [North] Macedonia, Montenegro, Croatia and Slovenia,” the e-commerce platform said on its website.

In January 2022, Delta Holding announced that it is developing an e-commerce platform, Ananas, which will be active in the first half of this year.

“It will be characterised by an extremely large range of goods, cooperation with the largest suppliers, but also a completely new user experience,” Delta said back in January.

Delta announced that investments in Ananas in the next five years will amount to €100mn.