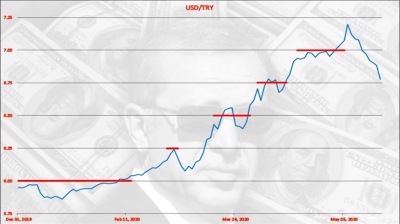 The lira briefly gained after the swap announcement before retreating to a slight loss day on day.
By Akin Nazli in Belgrade May 20, 2020

Turkey, under pressure to secure fresh foreign exchange to defend the embattled Turkish lira (TRY), on May 20 announced that Gulf ally Qatar has agreed to raise the overall limit of its existing swap deal with Ankara to $15bn-equivalent in TRY and Qatari riyal (QAR) from $5bn.

The swap agreement between the Turkish and Qatari central banks was initially signed in August 2018 during the height of Turkey’s currency crisis with a limit of $3bn. It was amended last November to $5bn.

After briefly making a slight advance after the swap announcement, by around 17:00 on May 20 the TRY was weaker by 0.32% against the dollar at 6.79. It hit an all-time low of 7.27 on May 7, since when it has rallied partly on Turkey squeezing offshore trading of the currency and to a degree on speculation that substantial swap lines could be offered by the UK and Japan and an existing facility with China, signed eight years ago and renewed every three years, could be expanded.

Also on May 20, the Turkish finance ministry said that the treasury would sell USD and EUR-denominated one-year domestic bonds and sukuks via direct sales to local lenders.

In comments on the swap extension, he observed in a note that the “The Qataris come through” without “any news from G-20 countries”. The Qataris in 2018 pledged $15bn of support, but a third was intended for portfolio investment and another third for project finance, according to Ash. “I don’t think much of the $10 billion non-swap part of this agreement was disbursed, so maybe the Qataris are just rolling this into swaps,” he said.

The BNP decision shows how difficult it has become for foreigners to trade the lira, Bloomberg commented. Some critics see lira trading by now as a closed, controlled market, given the innumerable regulatory changes and other moves made by the Erdogan administration.

Private lender Garanti BBVA said in an Istanbul stock exchange filing on May 20 that it has rolled over its syndicated loan by signing for $699mn from three separate loan agreements, namely a syndicated loan and loan agreements with the European Bank for Reconstruction and Development (EBRD) and the World Bank’s International Finance Corporation (IFC).

The day also saw Turkey impose an additional tariff of up to 30% on more than 800 import items including work and agriculture machinery.

Following that move, Turkish finance minister Berat Albayrak was reported as saying Turkey will make it harder to import goods except for strategic products and those that cannot be produced domestically. “Imports will not be easy,” he was quoted as saying by state-owned Anadolu Agency news service, adding that domestic production will be prioritised and Ankara will implement long-term lira financing programmes for the industry sector.

In a May 20 report, Bloomberg quoted unnamed officials “with direct knowledge of the matter” as saying that Turkish policymakers were concerned lower lira deposit rates might result in a rush for more USD and thus create another source of imbalance. Some private lenders have aggressively cut their lira deposit rate offers. They have made that move, rather than boosting their loans, in order to comply with the regulator’s recently-imposed asset ratio.

Romania’s Blue Air goes from flying high to seeking debt restructuring
5 hours ago
HDZ’s Andrej Plenkovic ready to form new government in Croatia
13 hours ago
Czech mining group OKD to shut down its mines for six weeks
15 hours ago
Hungarian government paid Wizz Air €14mn to fly in PPE from China
1 day ago
Week before crucial vote, no way of telling who will be Poland’s next president
1 day ago