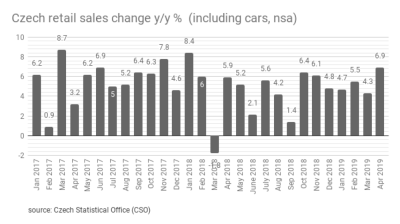 Czech retail sales, non-adjusted for calendar effects, accelerated to 6.9% year-on-year in April from 4.3% in March, mostly due to a 10% increase in food sales, the most y/y in the past 16 years, significantly influenced by the Easter holiday, based on data by the Czech Statistics Office released on June 5.

Seasonally adjusted sales went up by 0.2% month-on-month. The sales figures exceeded analysts' expectations, the Czech News Agency (CNA) noted. The Czech households continued in their desire to spend even during the Easter holiday, but according to some experts, the growth of retail sales may weaken due to the economic slow-down in the coming months.

Sales in retail trade adjusted for calendar effects grew by 5.4% y/y, influenced mostly by a growth in food sales by 5.6%, in non-food goods by 6%, and in sales for automotive fuel by 3%.

“Most of the products, however, recorded higher revenues, with exception in specialized stores for clothing and footwear, where sales decreased y/y mainly due to a high comparative base from the last year,” said the Director of the Service Statistics Department at the Statistics Office Marie Bouskova, as quoted by CNA.

“Retail sales surged in April, although they were affected by some one-off effects related to Easter. This year's sales (excluding cars) are similar to those in the previous two years, so households are not losing their appetite for consumption just ye,” said ING Chief Economist Jakub Seidler.

The highest sales growth was recorded in retail sales online or via mail order services, up by 20%. Higher purchases of food were reflected in the growth of sales in non-specialised stores with food, beverages or tobacco, up by 10.4% and in specialised stores by 3.7%.

“Due to the expected slowdown in economic activity and wages, we expect retail sales to slow slightly this year compared to the previous year. That said, household consumption will still be one of the main factors behind the growth of the domestic economy this year, as confirmed by previous figures,” Seidler added.

Capital Economics pencils in second-quarter contraction of around 15% q/q on pandemic impacts.

No cause to party in Turkey with Q1 growth of 4.5% y/y overshadowed by “ominous” outlook for Q2
12 hours ago
Trust in Russian President Vladimir Putin sinks to 25%, approval of his actions down to 63%
1 day ago
Real wages in Ukraine dropped 0.4% y/y in April, after growing 9.3% y/y in March
2 days ago
New coronavirus cases decline across emerging Europe but the epidemic’s not over yet
2 days ago
COVID-19 lockdown results in collapse of Lithuanian retail sales in April
4 days ago