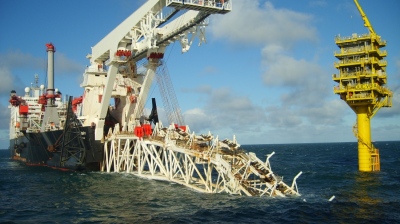 In a surprise decision, the German Bundesnetzagentur, responsible for awarding the certification that would allow the controversial Nord Stream 2 gas pipeline to go into operation, has decided to suspend the process until its holding company has reorganised its legal structure to conform with German law, the body said in a tweet.

The Bundesnetzagentur said once these changes have been made it would resume its work and probably take the four months mandated to consider the application. The upshot of the suspension of the Bundesnetzagentur work is that it is now highly unlikely that Nord Stream 2 will come online this winter.

Prices for natural gas spiked on the news, rising back above $1,000 per thousand cubic metres after they had fallen in the last week to around $700-$800 after Russia’s gas company Gazprom began to increase supplies of gas to its EU-based storage facilities.

“The certification procedure will remain suspended until the main assets and human resources have been transferred to the subsidiary and the Bundesnetzagentur is able to check whether the documentation resubmitted by the subsidiarity, as the new applicant, is complete. When these requirements have been fulfilled, the Bundesnetzagentur will be able to resume its examination in the remained of the four-month period set out in law. Produce a draft decision and delivery it to the European Commission for an opinion, as provided for in the EU legislation on the internal market,” the Bundesnetzagentur said in a tweet.

“If the pipeline is going to be certified, it will have to comply with EU regulations for third-party access, giving Rosneft, BP and other firms an opening to sell volumes via the pipeline in the future. BP CEO Bernard Looney has made it clear his company would be happy to participate if Rosneft receives the legal right to export gas,” Nicholas Birman Trickett, a commodities analyst, said in a newsletter.

Increases in Russian throughput into Europe are operating off a low base and can't make up the shortfall with domestic demand at record levels too, which analysts say means that prices will stay high all winter now there will be no respite from an early approval of Nord Stream 2.

The length of the delay will depend on how long it takes decision-makers in Moscow to work out a legal arrangement ending Gazprom's pipeline export monopoly, something it has resisted for years.

And once the Kremlin has worked out a new scheme then this has to be presented to, and be acceptable to, the Bundesnetzagentur.

“It's a power play given the timing with events concerning Ukraine and Belarus, but one that still makes clear Germany wants the pipeline to be functional,” says Birman Trickett.

The decision comes a day after the agency announced that Ukraine’s natural gas company Naftogaz will participate in the certification of Nord Stream 2. As participants in the process have no veto analysts were unperturbed by the announcement, which was seen largely as a PR victory for Ukraine.

Naftogaz CEO Yuriy Vitrenko said: “We welcome BNetzA’s decision to accept Naftogaz’s petition to intervene in the certification of the Nord Stream 2 operator. We have significant legal and commercial interests in the European gas market and are encouraged by the fact that BNetzA is willing to examine the issue from different angles. Our view remains: the Nord Stream 2 pipeline operator cannot be certified unless it complies with all requirements of EU competition and energy law. There can be no special treatment for Gazprom,” Vitrenko said.

“At the moment, the Nord Stream 2 pipeline is endangering Germany’s and Europe’s security of supply. It is anti-competitive, and will not provide necessary additional gas transportation capacity either to Germany or to Europe. More than enough excess transit capacity exists today, but is not being used by Gazprom in its existing contracts with Ukraine’s Gas Transmission System Operator. We see no justifiable commercial purpose for Nord Stream 2,” Vitrenko said in a press release.

The new decision may be an attempt to crank up the pressure on Russia after Gazprom decided not to book any additional transit capacity via Poland and Ukraine for December.

“At this point, it's a question of who blinks first. It's easy to bemoan just how foolish this move is for consumers, myself included, in Europe and it will worsen short-run energy price inflation. I'm less sure it's a mistake and think it's an intelligent bit of diplomacy, particularly with Ukraine's past offer of a considerable discount for pipeline capacity that may be revisited,” says Birman Trickett.

Gazprom has a firm take-or-pay contract with Ukraine for 40bn cubic metres per year for 2021-24. Thus gas transit through the country is unlikely to fall below this level in the next three years. However, after the launch of NS2, Gazprom might redirect gas flows from the Ukraine transit route after 2024, VTB Capital (VTBC) said in a note.