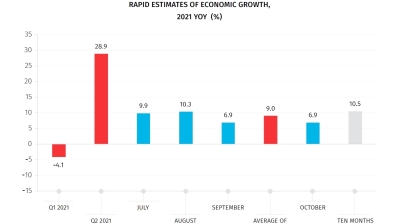 By Iulian Ernst in Bucharest December 2, 2021

The economic growth of Georgia remained steady at 6.9% in October, at the same level as in September, according to the flash estimates released by the statistics office Geostat.

For the first 10 months of the year, Geostat estimates an average growth rate of 10.5%.

The government drafted the 2021 budget on assumptions of 10% growth, while it projected 6% GDP growth for 2022.

TBC Capital revised upwards in early November its forecast for this year’s GDP growth in Georgia from 10.5% projected under its summer forecast to 11-11.5%. The figure looks now on the optimistic side, particularly given the new COVID-19 restrictions likely to impact the winter tourism season in the country. For 2022, TBC expects 6% growth.

The latest growth data released by Geostat indicate that the growth had already eased in September-October to a slower rate compared to the previous two quarters, when the country’s economy was still in a recovery stage after the shock experienced in 2020.

In October, the estimated real growth compared to the same period of the previous year was observed in most of the economic sectors: manufacturing, transportation and storage, arts, entertainment and recreation, utilities, financial and insurance activities, HoReCa and trade.

A decline was registered in construction.

Inflation in Georgia peaks at 13.9% y/y in December

World Bank forecasts Georgian economy to grow by 5.5% in 2022, 5% in 2023
Inflation in Georgia peaks at 13.9% y/y in December
DEATH OF THE SOVIET UNION: BOOK REVIEW – Reassessing the causes of the Soviet demise

Annual inflation reached 8.2% y/y in December and energy prices contributed more than half.

Slovak inflation up to 5.8% in December

Consumer prices increased by 7.4% y/y in December, while core inflation rose to 6.4%.

Mass emigration and the ongoing coronavirus pandemic contributed to the decline.

The average net wage in Romania rose by 2.8% m/m in November to €736.5 in one of the highest monthly increases over the past couple of years.