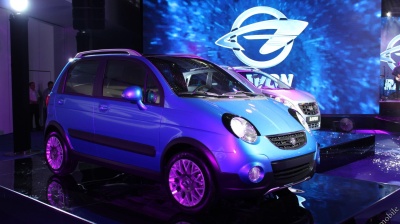 GM Uzbekistan sells its cars in the CIS market under the Ravon brand
By bne IntelliNews July 5, 2019

Uzbek state-run car producer GM Uzbekistan has been renamed UZAUTO Motors, after the US company completed its withdrawal from the country, GM Authority reported on July 3.

As the most populous state in Central Asia Uzbekistan is the natural choice for manufacturers and has been surprisingly successful in developing its automotive sector from scratch, which have included rare big foreign direct investment (FDI) investments into the country.

Among the few FDI deals he did, former president Islam Karimov travelled to Korea and persuaded the chain-smoking legendary chairman of Daewoo to set up a factory in Andijan in 1992. The business took off and the cheap but reliable cars were a big hit on the lucrative Russian market.

GM Uzbekistan is the successor of the UzDeawoo joint venture since 2008 after the Korean company collapsed and became GM Korea. The company continued to sell its cars under the UzDaewoo brand until 2015 when it changed to the Ravon brand

Now the new administration in Tashkent is taking full control of the car plant. The renaming follows the government buying out the last of the General Motors-owned 25% stake in the company.

GM held a 25% stake in the Uzbek automaker before the Uzbek government, via state-owned Uzavtosanoat, bought two-fifths of that stake in 2018, bringing its stake to 85%. In late December, Russian auto news website AutoReview.ru reported that Uzavtosanoat had bought out GM’s remaining shares, making GM Uzbekistan 100% state-run. The renaming of GM Uzbekistan into UZAUTO Motors has completed this process.

The company increased local content in its vehicles in 2018. This helped reduce imports of components from abroad by the amount of $14.6mn. The plans for 2019 contain goals to increase local content with 240 more components, on top of the extra 100 used last year.