Gas war seen as next phase of Russia-Ukraine conflict

Even if a lasting ceasefire in eastern Ukraine can be secured, the cessation of military hostilities will only mark the beginning of a new fight. The battle between Russia and Ukraine over gas supplies is about to restart and will probably come to a head in January when Ukraine could run out of gas.

Temperatures have begun falling in Eastern Europe and the heating season is about to begin. Ukraine's economic position is about as dire as its military position. It is still heavily reliant on imported Russian gas, but it still owes the Russian state-owned gas firm Gazprom just over $5bn and will have to buy another 5bn-10bn cubic metres of gas this winter if it consumes as much as it did last year. The problem is that the promise of $2.8bn from the International Monetary Fund (IMF) in December as part of Ukraine's $17bn stand-by facility, the country still won't have enough money to pay its gas bill; the entire IMF loan for this year will just cover what Kyiv owes Gazprom and that is before it pays coupons on its bonds, meets its social and pension obligations, recapitalises the banking sector or spends a penny on rebuilding the Donbass region.

Actually, it has already started. Gazprom cut Ukraine’s supply in June over the unpaid gas bills. So far, Ukraine’s domestic production and its imports from Poland and Hungary have been enough to cover demand in the summer, when Ukraine consumes less than 80m cubic metres a day (cm/d). But this rises to more than 210m cm/d in winter, according to a recent EU study.

Ukraine is home to most of the former Soviet Union’s gas storage facilities and has put enough aside to cover demand for the first half the winter. The worry is what happens after that, especially if February turns out especially cold.

Gazprom said this year it would cut gas transit to Europe through Ukraine to 46.3bn cm in January–August from 54.4bn cm a year earlier. Its total supplies to Europe will fall to 107b cm, with Ukraine’s share falling from over half to 43% of the gas pumped.

Ukraine has just under 16bn cm of gas in storage, down from an average of 18bn-20bn cm at this time of year. The country produces about 22bn cm of its own gas, but that still leaves a shortfall of some 16bn cm if consumption is the same as in 2013.

To close the gap, Ukraine plans to cut consumption this year to 45bn-46bn cm while trying to get gas from EU countries by reversing the flow in some of its pipelines. Slovakia has promised to reverse flows and could supply up to 10bn cm. After that, Kyiv has little choice but to turn to Russia for the remaining 6bn cm (actually more like 10bn cm, as 5bn-6bn cm of “technical gas” cannot be removed from the pipeline), at a cost of around $2bn depending on the price agreed.

Still, the gap is small enough that as long as Ukraine can reduce consumption by a fifth this winter (and Ukraine is the most inefficient user of gas in Europe) and gets some gas from its new friends in the EU, it could muddle through the winter without buying Russian gas, according to two recent studies.

"Based on a scenario analysis we find that Ukraine can only get over the winter without Russian gas when demand is reduced by at least 20% and reverse flows from Slovakia are inaugurated. If one of these two conditions is not met, then storages would run below critical levels in early 2015. The only way to avoid a shortfall of gas in this case would involve resuming imports from Russia several weeks before the storage runs empty," says a report produced by the German Advisory Group and the Institute for Economic Research and Policy Consulting.

The Institute drew up six scenarios (see table), four of which result in Ukraine running out of gas between November and January if it fails to both cut gas consumption and get more gas from the EU.

The common factor in the two scenarios under which Ukraine survives the winter is that it succeeds in cutting consumption by a fifth. After that, the amount of gas it gets from the EU will make life progressively easier as deliveries rise. 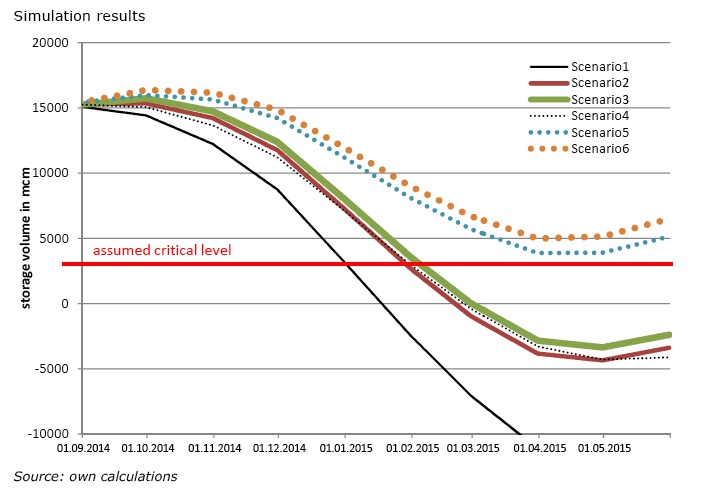 Ukraine’s problem is also Europe’s. Some 40% of imports from Russia might not be delivered to the EU. What happens then?

Europe is in a similar position to Ukraine: nearly all countries have used the summer to fill their gas storage facilities and many are over 90% full. Europe (including Ukraine) has a total of 88bn cm of gas in storage. 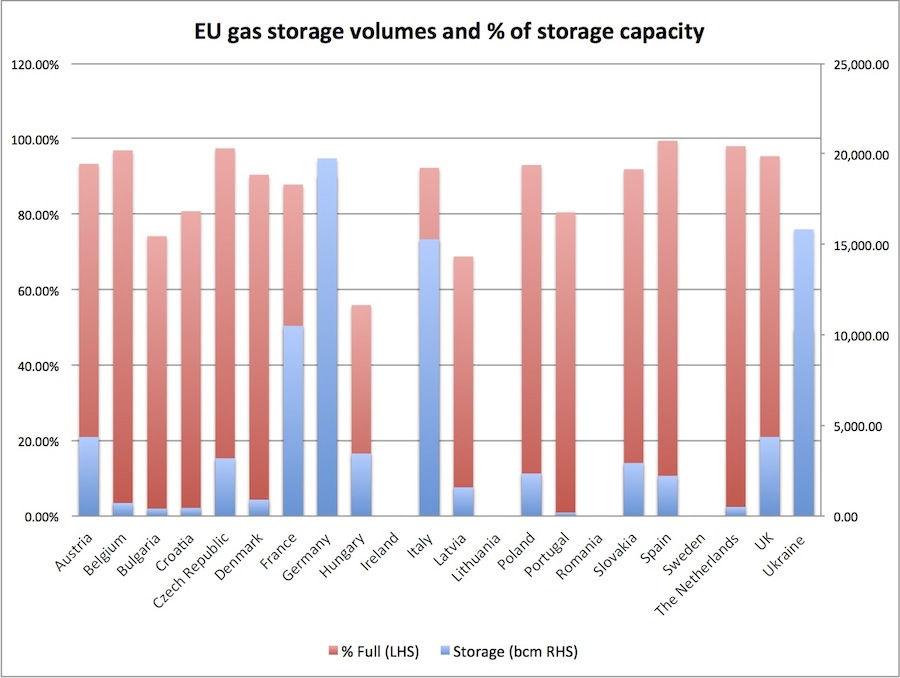 Another study for the Institute of Energy Economics at the University of Cologne found that if Ukraine runs out of gas, the rest of Europe would run out too: "Russian gas exports are crucial for European supply. In 2013, Russia exported more than 160bcm of natural gas to Europe (including Turkey, excluding Belarus and Ukraine), thereby supplying more than 30% of European annual gas demand."

If supply were to be cut off for three months, the IEE reckons, all of Europe would be able to get through the winter except for Poland, Turkey and Finland.

However if there were a six-month suspension, shortfalls would occur in Germany and many other countries in Emerging Europe, while only France and Italy would be able to cope (80% of power in France comes from nuclear).

A nine-month suspension would severely disrupt supplies in every country including Italy and France, leaving a 46bn cm hole in gas demand, according to the IEE.

Germany is by far the largest customer for Russian gas in Western Europe. Its significant storage facilities (equal to 25% of its annual demand) mean it could last up to five months without more gas from Russia, says the IEE. "Europe has to import at least an additional 45bcm of [liquid natural gas] compared to 2013, which implies soaring gas prices since LNG has to be attracted from Asia. German storage will only be refilled to a maximum of 85% after the embargo is over, which implies lower security of gas supply in the following winter of 2015–2016," the IEE report says.

If supplies were cut for six months, it would cause a deficit in Germany of 3bn cm; after nine months the deficit would rise to 12bn cm.

Commentators have raised the possibility of supplying Europe with liquefied natural gas (LNG) from the US and elsewhere. Europe has some 20 ports able to accept LNG deliveries. But the US does not yet have the facilities to export LNG and won’t have before 2015.

There has been little discussion of the price shock involved in ramping up LNG supplies to Europe. An additional 45bn cm of LNG would be needed to stabilise supplies in Europe during a five-month cut in supply. In a seven-month cut, 65bn cm would be needed. But even this level of imports wouldn’t spare Poland or Turkey from shortages because of their limited infrastructure, argues the IEE.

All this assumes the coming winter will be a normal one. The IEE goes on to speculate on what would happen if there were a cold snap in February and concludes that it would cause shortages in almost all of Europe: "Since gas infrastructure (LNG imports, storages and pipelines) is already in an extreme situation, it could not compensate for increased gas demand, caused by a cold February."

Is Russia prepared to escalate the fight to the point where it cuts off supplies to Europe? The cost of cutting off gas to Europe is also a huge cost to the Russian state. Although Gazprom sells more gas at home and in other Commonwealth of Independent States than it exports to what it calls "Far Abroad" countries (in 2013, 288bn cm vs 174bn), the key EU states are responsible for about two-thirds of revenues, since it is sold there at mostly at market prices.

However, the events of recent months have shown that when push comes to shove, if Putin is forced to choose between Russia’s national interest and Gazprom’s bottom line, he clearly will side with the former.