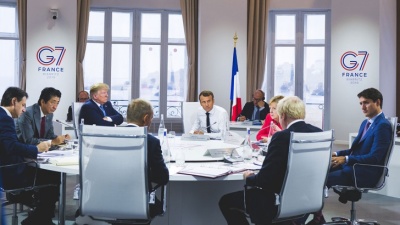 G7 leaders in a session at the summit in Biarritz.
By bne IntelliNews August 26, 2019

Iranian President Hassan Rouhani has offered some encouragement that he might be open to a meeting with US counterpart Donald Trump within coming weeks to start the process of resolving the standoff between their two nations.

After manoeuvring by French President Emmanuel Macron at the weekend G7 summit in France to try to open up a path on which Washington and Tehran could move towards addressing their bitter disagreement over the 2015 nuclear deal, Rouhani on August 26 said he was ready to meet anyone if he felt it would benefit Iran.

"If I am sure that attending a session or having a meeting with someone will help develop my country and resolve the people's problems, I will not hesitate to do so," he added.

Both Rouhani and Trump are scheduled to attend the United Nations General Assembly in New York next month.

The US is using a crushing sanctions regime in an attempt at wrecking Iran’s economy to the point that Tehran is forced to come to the table to renegotiate the nuclear deal—and see its role in the Middle East greatly diminished—and Iran has previously said it would not consider the notion of a meeting with Trump unless the US dropped the sanctions first.

Trump hints at economic easing
Trump, who responded to Macron’s attempted mediation by saying he would for a meeting with Rouhani under the right circumstances, hinted at a G7 news conference on August 26 that he might be open to some economic easing for Iran in advance of talks with Rouhani.

Stressing that he was not open to giving Iran compensation for sanctions on its economy imposed by Washington since the US unilaterally pulled out of the nuclear accord with six major world powers, Trump said numerous countries would give Iran a credit line to keep it going.

Trump also commented that Rouhani is “a great negotiator, but I think he is going to want to meet, I think Iran wants to get this situation straightened out. Now is that based on fact or based on gut, that’s based on gut, but they want to get this situation straightened out… and they really are hurting badly… their inflation is through the roof, their economy has tanked entirely, the sanctions are absolutely hurting them horribly [and] I don’t want to see that, they’re great people, I don’t want to see that, but we can’t let them have a nuclear weapon, we can’t let it happen, so I think there’s a really good chance that we would meet.”

The nuclear deal requires Iran to keep its nuclear development program purely civilian in nature in return for the dropping of international sanctions. In reality the deal has been entirely undermined by the US withdrawal—which came even though UN inspectors said Iran was in full compliance with the accord—as the other countries signed up to it along with Iran—the UK, France, Germany, Russia and China—have done little to protect Iran’s economy from the punishing US sanctions that have been cranked up in the past 15 months.

Macron advertised his seriousness about bringing the US and Iran together to address their differences by inviting Iranian Foreign Minister Mohammad Javad Zarif to pay a surprise visit to Biarritz, the location of the G7 summit, for talks on the summit’s sidelines.

The French president said he informed Trump of his plan to invite Zarif, after discussions with Iranian officials on possible solutions to the nuclear deal row.

Macron also noted that he had told Rouhani that "if he accepts a meeting with President Trump, I am convinced an agreement can be found".

"We’re looking for no nuclear weapons, no ballistic missiles, and a longer period of time," Trump said, without mentioning another demand usually talked up by officials in his administration, namely Iran dropping its backing for militias across the Middle East that are variously enemies of Israel and Arab allies of the Americans.

"I really believe that Iran can be a great nation," Trump added. "I’d like to see that happen."

“What unites us, and that is a big step forward, is that we not only don’t want Iran to have nuclear weapons, but we also [want to] find the solution to that via political means,” German Chancellor Angela Merkel said at the end of the G7 gathering.

Foot traffic at Russia’s leading malls jumps as rebound gets underway
6 hours ago
Armenia’s coronavirus plight worsens with more than 1,000 more infections in two days
15 hours ago
Authorities “may be sowing seeds of Turkish economy’s downfall” by pumping money at fastest rate for more than decade
17 hours ago
Turkey’s electricity consumption collapses 17% in May
1 day ago
Russian government presents National Recovery Plan to President Putin
1 day ago