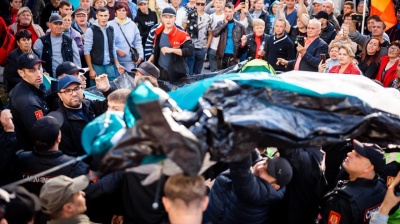 A tent carried over the heads of protesters as they set up camp in central Chisinau. / partidulsor.md
By Iulian Ernst in Bucharest September 26, 2022

A mass protest gathering several thousand people, mostly from outside of the capital city Chisinau, took place for the second weekend in a row in the capital of Moldova, against the pro-EU authorities.

The organisers of the protests, the Sor Party of fugitive businessman Ilan Shor, are calling for the resignation of the authorities and for snap elections.

The size of the crowd outside the presidency building was estimated by Reuters at several thousand people, but somewhat smaller than the demonstration also organised by the Sor Party a week earlier. (The party claimed almost 45,000 people took part.)

After 17:00, the police intervened as the protesters tried to set up tents in front of the presidency.

Shor, who is also an MP despite being sentenced in 2017 to seven years and six months in prison for fraud and money laundering, spoke via Skype during the protest and made several accusations against Moldovan President Maia Sandu.

"Maia Sandu promised to bring in good and fair people, but she brought people who have tens of millions of euros in bank accounts in the West. They came to steal our country. All their money is in the West. That's why they obey their masters in the West. The [ruling Party of Action and Solidarity] PAS wants to leave Moldovans without gas. They want to bring the country to its knees, but we will not allow it,” said Shor, according to a party statement.

Shor, one of the main suspects in Moldova’s so-called ‘$1bn bank frauds’, fled the country in 2019. However, he still has a following within Moldova, and a recent poll showed that the Sor Party would take 15.5% of the votes if an election were held now.

The street protests are not expected to succeed in overthrowing the government, given the PAS’ solid majority in parliament, but they will add to the tensions in Moldova that are likely to grow as utility companies start sending out higher energy bills during the colder months towards the winter.

Promising anti-corruption reforms, the PAS was elected by a landslide in 2021, but since then the Western-oriented government has come under pressure because of the strains of coping with high inflation, increased energy prices and the impact of the war in neighbouring Ukraine, including the arrival of hundreds of thousands of refugees.

In a commentary to Newsmaker.md, PAS spokeswoman Adriana Vlas claimed that the demonstration was financed from illegal sources. In this regard, PAS invited law enforcement agencies to investigate the violation of the law.

The Sor Party in turn complained that the police prevented the entry into Chisinau of vehicles carrying people wishing to take part in the protest in the centre of the city. The party claimed the government gave strict instructions to police agents to stop the buses.

“Police officers stop vehicles at the exit from Balti and Cimislia at the direction of the authorities. Prior to this, the National Motor Transport Agency (ANTA) sent written and oral notices to some carriers threatening to revoke their licenses if they transport protesters to anti-government rallies,” the party’s press service said.