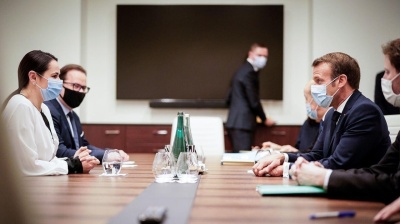 French President Macron promises Belarus’ opposition leader Tikhanovskaya to do all he can to help
By Ben Aris in Berlin September 29, 2020

The meeting is bound to wind up Belarus' self-appointed President Alexander Lukashenko, as it comes a few days after Macron called on Lukashenko to step down, provoking a crude retort from the Belarusian strongman.

Macron offered Tikhanovskaya France’s support and said he would do all he could to ensure a peaceful end to the protests.

“As Europeans, we will do our best to help return to OSCE mediation and make progress. We had a very good discussion, but now we must be pragmatic and support the people of Belarus. We will do everything in our power, believe me,” Macron told journalists after the closed meeting was over.

Tikhanovskaya noted that the Belarusian people are in favour of holding new elections this year. “It is elections that should be the topic of international negotiations, and the OSCE is the best platform for such negotiations,” Tikhanovskaya said, emphasising that she is ready to talk with all parties – including Russia – about organising negotiations and Belarus overcoming the crisis.

“Human lives are at stake. The longer we plunge into a crisis, the more victims it takes. Therefore we are interested in starting negotiations as soon as possible. And I am grateful to France for their attention. Emmanuel Macron is well informed about the Belarusian situation, follows the events and supports Belarusians in our struggle for freedom,” Tikhanovskaya said after the meeting.

Earlier this weekend she reiterated the limited nature that support should take. “I’m not in favour of general sectoral sanctions,” she said in a statement posted on the Nexta Telegram channel. “I favour specific targeted sanctions against individuals and companies that support and finance the Lukashenko regime.”

The meeting with Macron follows a week where Tikhanovskaya was in Brussels to meet with top EU diplomats to lobby them for help. She hinted that the EU had offered a “serious” economic aid package should the protesters emerge from the conflict with Lukashenko victorious but gave no details.

And Lukashenko has aided her campaign by managing to alienate almost the entire Western world with his secret inauguration on September 23.

Tikhanovskaya’s campaign will continue. According to AFP, she has also accepted the invitation to speak before the French parliament. It was announced that she will also meet with German Chancellor Angela Merkel next week, who also met with anti-corruption blogger and opposition activist Alexei Navalny at the weekend, who is recuperating in a Berlin hospital from an assignation attempt.

“Next week we have a meeting with Angela Merkel as well as a number of other meetings in Europe,” Tikhanovskaya said in an interview with French radio RFI. “Some will take place online, some in person. But they (meetings) are very important for the peaceful resolution of our issue.”

While Tikhanovskaya welcomed the support, these meetings also mean the protest movement is slowly getting dragged into the geopolitical stand-off between Europe and Russia, which is doggedly sticking to its support of Lukashenko. There was a regional conference in Belarus this week where Russian and Belarusian companies announced they had signed over $700mn of contracts. At the same time, the authorities confirmed the price of gas Russia will sell to Belarus next year.

Russia continues to try to muddy the waters with its reporting spin on the events in Belarus, painting the EU as interfering with the politics of a sovereign state and undermining Macron’s credentials. RT’s report on the meeting went out of its way to mention Lukashenko’s remark that if he was supposed to step down because there were some protests on the streets of his capital city, then by the same logic Macron should have quit two years ago when the first “yellow vest” protests started in Paris.

Macron was actually in Vilnius to meet with his Lithuanian counterpart Gitanas Nauseda, the first time a sitting French president has been to Vilnius in almost two decades.

The main topic of those talks too was the situation in Belarus. Both leaders reiterated that their countries do not recognise Lukashenko's legitimacy. Macron also stated the need to "hear about the protesters' desire for freedom" and called on the Belarusian authorities to "put an end to arbitrary arrests".

Nauseda, for his part, stated a common position with Macron. "On the issue of Belarus, we came to a consensus – the EU cannot waste time, but must do everything to ensure that these sanctions, which were discussed and proposed, were approved at the next meeting of the European Council,” he said as cited by BNS.

The Baltic states together with Poland have already imposed targeted sanctions on around 30 top officials from the Lukashenko regime, but the EU has failed to act collectively. A vote to impose sanctions last week was vetoed by Cyprus, which is worried about souring its relations with Russia, with which it has significant business.

Nauseda said that France and other EU countries need to act as mediators to resolve the situation in Belarus, but admitted there are problems.

“I would like to encourage European countries, first of all France, to act as mediators in establishing a dialogue between the official Minsk and civil society, moreover, so that Russia would also participate in this dialogue," the Lithuanian president said in an interview with the Le Figaro. "We have already made efforts to this, but we would like other countries to join us… It was not possible to reach an agreement [at the Brussels meeting last week]. I hope that this issue will be properly resolved at the next summit, because we should demonstrate our solidarity, avoiding the EU's image fading.”

Lithuania has been nervous about Macron’s efforts last year re-engage with Russia. He hosted Putin in Paris and travelled to St Petersburg International Economic Forum (SPIEF) as a guest, Russia’s premier investment conference.

"We are very realistic about Russia and its behaviour. That is why we were wary of this initiative. The poisoning of Navalny, as well as Russian interference in Belarus, certainly create obstacles to the efforts of President Macron," Nauseda argued.