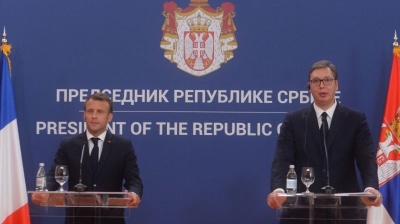 French President Emmanuel Macron promised to help restart talks between Serbia and Kosovo, arranging a special meeting between leaders of the two countries and German Chancellor Angela Merkel to find a solution, the government in Belgrade said in a statement.

Kosovo declared independence from Serbia in 2008 but it is still not recognised as a separate country by Belgrade. Recently, tensions between the two countries have again increased after Pristina decided at the end of 2018 to impose 100% tariffs on all imports from Serbia.

During his two-day visit to Serbia, Macron said that France, along with Germany, is ready to support the restart of dialogue, aiming to find a solution in the coming months.

Macron also said that some external powers have an interest in making sure no deal is found. He added that France is against any unilateral efforts by either side and that Europe will become stronger if it helps the two countries to find a solution.

Previously there had been talk of the two sides nearing a negotiated solution more than a decade after Kosovo unilaterally declared independence from Serbia. However, the imposition of the tariffs worsened their already strained relations.

The summit was due to have been hosted by Macron and Merkel and attended by Serbian President Aleksandar Vucic and Kosovan President Hashim Thaci.

Reaching a settlement is a condition for both countries’ progress towards EU integration. Serbia is in the midst of accession negotiations and has a tentative target accession date of 2025, but reaching this target will be impossibly without an agreement with Pristina. Meanwhile, Kosovo is the furthest of the Western Balkan countries from EU accession as it is not recognised as an independent state by five EU member states.

Tens of thousands of people gathered on Minsk's Independence Square in front of the main government offices in first night of peaceful protests against Belarusian president Lukashenko's falsification of the election results.