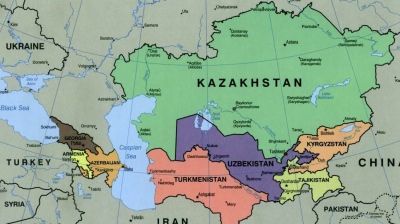 Russia is the dominant political force in Central Asia, but the five 'Stans have been surprisingly defiant in refusing to wholeheartedly back the Kremlin's "special military operation" in Ukraine. / wiki
By Alexander Thomas for FPRI BMB Ukraine June 30, 2022

To the surprise of many, each of the Central Asian Republics has maintained a neutral stance on Russia’s military operations in Ukraine. Ever since the dissolution of the Soviet Union in 1991, Russia has worked tirelessly to maintain political and economic influence over the five Republics of Central Asia (Kazakhstan, Kyrgyzstan, Uzbekistan, Tajikistan and Turkmenistan). Prior to Russia’s invasion of Ukraine, each of these republics was heavily reliant on Russia for land trade routes, migrant labour and security assurances. Now, with Western sanctions on Russia blocking the Central Asian Republics’ access to European markets, they find themselves increasingly unhappy with the growing consequences of Russia’s unprovoked war with Ukraine.

During the emergency UN General Assembly session on March 2 which condemned Russia’s invasion of Ukraine, all five Central Asian Republics abstained or did not participate in the vote. Furthermore, several of the foreign ministries for these countries made public statements respecting the territorial integrity of Ukraine as well as maintaining a “balanced, neutral position on the matter.” Uzbekistan’s Foreign Minister Abdulaziz Kamilov spoke at the Uzbek Senate in which he stated that Uzbekistan recognised Luhansk and Donetsk as territorially part of Ukraine, but also that Tashkent values its deep economic and political ties with Moscow.

Kyrgyzstan, Kazakhstan and Tajikistan each issued public statements to underscore their neutrality vis-à-vis the war in Ukraine in response to Russia’s press services misreporting on the nature of the three republics’ support for the war. Turkmenistan has continued its long trend of neutrality and avoided any public comment on the war, while Tajikistan has made no formal recognition or reference to the events in Ukraine. Kazakhstan’s response to Russia’s invasion is particularly noteworthy; after the Russian-led CSTO deployed peacekeepers for the first time in its history to quell anti-government riots throughout Kazakhstan, many thought President Tokayev would publicly support Russia’s invasion of Ukraine. In addition to this surprising lack of support, Tokayev has also reportedly denied a possible Russian request to deploy Kazakh troops to Ukraine as well.

The Central Asian Republics demonstrate that while support for Ukraine in its war effort is felt ubiquitously throughout the West, such support is not uniform across the former Soviet Republics, let alone the world. Whether they are driven by a fear of military retaliation from Russia or a genuine sense of neutrality remains unclear; what is certain is that Central Asia’s perception of Russia has fundamentally changed; once a paragon of opportunities and economic prosperity for Central Asia, Russia has now become a source of weakness for the regional stability, sovereignty and territorial integrity of its 76mn inhabitants.

The birth of a Kazakh banking empire: ATF Bank

ASH: The West is short-changing Ukraine

Ukraine received some good news in the middle of August, receiving the backing of private sector bondholders to give Ukraine a 24-month debt service freeze. That helps, but Kyiv is still running a $5bn a month deficit and the West needs to help.

RIDDLE: If they fear us they respect us

A July opinion poll conducted by the Levada Centre revealed that, despite the ongoing ‘special military operation’ in Ukraine and sanctions imposed on Russia, more than two-thirds of Russians believe that the country is on the "right track."

COMMENT: Can Russia pivot its European gas sales to Asia?

The search for alternative markets is being stepped up to secure the long-term future of the Russian gas industry. In the short-term Russia can't switch to Asia, but by the early 2030 Russia could be sending up to 126bcm to Asia.

The tightening cycle by central banks in Emerging Europe is coming to an end as regulators across the region start to get inflationary pressures under control, Capital Economics said in a note on August 8.

ASH: The West is short-changing Ukraine
11 hours ago
RIDDLE: If they fear us they respect us
11 hours ago
COMMENT: Can Russia pivot its European gas sales to Asia?
3 days ago
Perspectives | Beijing and Moscow clash over Kazakhstan’s oil
3 days ago
COMMENT: Emerging European tightening cycle coming to an end
7 days ago