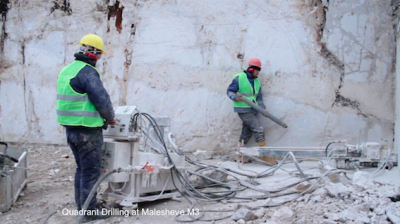 Drilling at the Malesheva quarry, at the centre of the Fox' arbitration claim.
By Valentina Dimitrievska in Skopje September 5, 2019

Natural stone extraction company Fox Marble said on September 4 it has launched arbitration proceedings against Kosovo for damages in excess of €195mn due to the failure of the state to protect the company’s rights over the Malesheva quarry.

In July, Fox Marble suspended operations at the Malesheva quarry due to a dispute over the recent acquisition of Green Power, which owns the license for Malesheva, and Scope for £1.3mn (€1.45mn). Green Power and Scope challenged the acquisition agreement. Numerous procedural and legal attempts in Kosovo failed to solve the matter.

The arbitration was initiated at the United National Commission on International Trade Law international (UNCITRAL), the company said.

Fox Marble believes that the Kosovan government is in clear breach of its responsibilities towards the company as a foreign investor in Kosovo, and that the claims challenging the enforceability of the acquisition agreement of Green Power and Scope are wholly unfounded.

"There has been a clear failure by the Kosovo government and its agencies to apply their own laws and regulation in a fair and equitable manner," Chris Gilbert, Fox Marble's CEO, said in the statement.

The company’s other operations, including the quarries and processing factory in Kosovo and the Prilep quarry in North Macedonia, are unaffected.

Foot traffic at Russia’s leading malls jumps as rebound gets underway
5 hours ago
Armenia’s coronavirus plight worsens with more than 1,000 more infections in two days
14 hours ago
Authorities “may be sowing seeds of Turkish economy’s downfall” by pumping money at fastest rate for more than decade
16 hours ago
Turkey’s electricity consumption collapses 17% in May
1 day ago
Russian government presents National Recovery Plan to President Putin
1 day ago