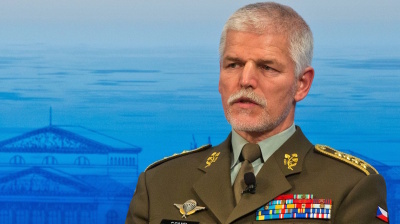 Petr Pavel, former Czech army chief of staff, high ranking Nato officer and veteran of missions to former Yugoslavia and Afghanistan, has confirmed his long awaited candidature for Czechia’s presidency. The first round of voting is scheduled for January 13-14.

“People feel abandoned by politicians” amid the present crisis, and “I want to change that”, said Pavel during his speech on Tuesday, which reflected his non-partisan approach to the candidacy presented in earlier interviews to Czech media.

However, Pavel also made it quite clear he wants to stand up against divisive populist politics, and he also criticised the power of business interests in Czech politics. “I am not indifferent to the fact that in our country some people are more equal than others” adding “I am ready to lead by example”.

Key stated priorities include an active foreign policy, an innovative economy, energy independence, education, and a healthy environment, while his election motto is “Let’s return order and peace to Czechia”.

A recent poll showed Pavel is the election’s favourite, together with controversial billionaire and populist opposition leader Andrej Babis, who is yet to confirm his own candidacy, which could happen on the country’s national holiday on October 28. In a possible run off round between the two, Pavel is favourite.

Pavel leaves an impression as though his bid is a mission to step in at a difficult time. “I don’t think of the candidacy as a selfish effort to be elected at any price”, he told DenikN in a recent profile interview.

His military career includes being the first officer from the former Warsaw Pact countries in the Nato command, having held the position of chairman of military committee, Nato’s second man, for three years.

Military rank “is a brand, in a way, under which people know me”, Pavel told DenikN, suggesting he is quite aware that his public image is inseparable from his military career. This could seem as quite unusual political profile in a country known for a literary and film tradition ridiculing the military, be it Jaroslav Hasek’s Good Soldier Svejk or Jaroslav Skvorecky’s  Republic of Whores.

When Pavel jokingly described his pre-1989 military past to that of private Kouba, the main hero of the 1980s popular film about Czechoslovak’s special units who somehow manages to be an elite soldier despite his disorderly behaviour and unwitting romances, he is in part tapping into the Czech ambivalent attitude towards the military.

However, Pavel’s pre-1989 past in the elite army units and military intelligence training, as well as his Communist Party membership, has also been a frequent source of critical comments from the country’s vocal anti-communists.

One of the most fervent of them, historian Petr Blazek, has been accusing Pavel of having been trained for an intelligence officer’s career. In the most recent televised debate at CNN Prima News, Blazek also accused Pavel of lying about his past and described the then Czechoslovak military intelligence as a “younger sister of the [Soviet] GRU”.

Pavel himself has demonstrated a break with the anti-communist strand of politics, traditionally associated with right-wing ODS as well as the centre-right TOP 09 and Christian Democrat parties in the ruling coalition. He stated for instance that he wouldn’t give a state decoration to the Masin brothers, sons of legendary Nazi resistance fighter, who shot themselves out of Stalinist Czechoslovakia leaving several dead, including a tied-up captive.

The three parties won the 2021 parliamentary election as the SPOLU grouping, which now forms part of the ruling coalition with the more liberal grouping of the Pirates and Mayors. The cabinet has been under pressure amid the deepening energy crisis, and Saturday’s far-right demonstration against the cabinet and the EU, organised by pro-Kremlin activists in Prague, attracted a crowd of 70,000.

Pavel has also expressed more liberal views than the ruling ODS of Prime Minister Petr Fiala. He defended the right to marriage for everyone and is more enthusiastic about adopting the euro currency than Fiala’s party, with its strong Eurosceptic wing.

Pavel appears to be carefully distancing himself from SPOLU, aware of its faltering popularity, while not severing the ties completely. Parties in the formation have so far largely not endorsed any candidate.