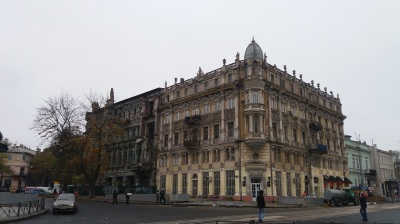 US media report, citing military sources, that Russian warships are headed towards the Ukrainian port city of Odesa.
By bne IntelliNews March 3, 2022

The tipping point for what currently is seen as a more or less stable situation in Moldova would be the occupation of the Ukrainian port of Odesa on the Black Sea by Russia, former Moldovan prime minister Ion Sturza commented on March 2.

The next step after Odesa is setting up a corridor towards Transnistria in Moldova, Sturza claimed. Transnistria, which lies between the eastern bank of the Dniester river and Moldova's border with Ukraine, has been controlled by Russian-backed separatists since the early 1990s.

On the evening of March 2, US media reported, citing military sources, that Russian warships have been seen heading from Crimea towards Odesa. This indicates it could be Russia’s next target on Ukraine’s Black Sea coast after Kherson and Mariupol.

“In terms of military security, Moldovans are on their own and have no resources or ability to defend themselves. We have a well-trained Russian army in Transnistria. In case Odesa and Tiraspol fall, the Russians will reach only 50 km from Chisinau and only the Dniester will separate us," Sturza declared during the ZF Live business show.

Moldova’s position is highly vulnerable, he warned — in contrast with the reassurances from the Moldovan authorities.

Both Moldovan President Maia Sandu and European Commission High Representative Josep Borrell said during a joint press conference in Chisinau on March 2 that there is no risk of the war in Ukraine expanding to Moldova.

“It is a complicated situation, but as I said before: there are no premises at the moment to believe that this military action, this war, will reach the territory of the Republic of Moldova. The authorities are doing everything they can to ensure security and peace in the future,” said Sandu.

“Instability close to the national borders can always be problematic, but we don't think there is a risk that the war itself will spread to your territory. The biggest concern is the flow of refugees, so matters that are not related to military actions," said Borrell.

Sandu has condemned the military aggression of the Russian Federation in Ukraine. But she also defended the position of the Minister of Foreign Affairs Nicu Popescu, who stressed that Moldova will not join the group of countries enforcing sanctions against Russia as it simply cannot afford to do so.

"There are many reasons [not to join the sanctions], including the fact that our society, our economy, our energy system are too vulnerable to make it difficult for the Republic of Moldova in such positions, which involve costs," said Popescu on February 28.

Earlier this week, President of Belarus Aleksandr Lukashenko appeared to have given away Russia’s invasion plan on live TV, with the footage going viral on social media.

At a conference with members of the Security Council and top officials of the Council of Ministers on March 1, Lukashenko stood in front of a map of Ukraine which appears to show military facilities destroyed by missiles from Belarus, attack directions and Ukraine divided into four sectors.

Twitter users were quick to point out that Moldova appears to be included in Russia’s invasion plans, prompting fears that the small republic would also be dragged into the war, as a red arrow pointing from Odesa leads into Transnistria.