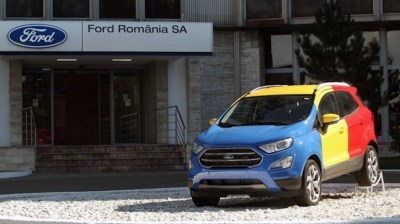 Ford’s car and engine factory in Craiova and Renault’s Dacia car and engine plant, both in southern Romania, will suspend their production because of the coronavirus (COVID-19) pandemic, the global automotive companies announced.

Both will reportedly suspend their operations at least until April 5, but their decisions on resuming operations are likely to depend on future developments.

Ford had just doubled its production in January as it launched a new SUV model at the end of 2019, and neither Romanian car plant had reported problems related to the suppliers or demand. Romania has a thriving auto-components industry, which has sheltered its automakers from supply chain disruptions.

However, the closures come in the context of the severe expected impact on the motor vehicles and parts industry. Globally it is expected to experience a 4.4% contraction this year, according to IHS Markit projections, making it the worst affected sector.

The Ford factory will support the payment of 78% of the wages to its 6,000 employees from its own resources, but company officials have discussed allowances with the government of Romania.

The decision to shut down the Romanian plant was part of a Europe-wide move. Ford Motor Co. said on March 17 that it is suspending vehicle and engine production at its manufacturing sites in continental Europe, effective Thursday, over COVID-19 concerns. Ford’s continental Europe sites are in Germany, Romania and Spain.

Ford says the manufacturing facilities will be down for a number of weeks but did not go into specifics. The trade union at the Craiova factory said they have been notified that operations would be suspended for at least at least two and a half weeks, until April 5.

"While the impact of coronavirus at our facilities so far has been limited thankfully, its effects on our employees, dealers, suppliers, and customers, as well as European society as a whole, is unprecedented," Stuart Rowley, president of Ford Europe, said in a statement.

"Due to the dramatic impact this ongoing crisis is having on the European market and the supplier industry — together with the recent actions by countries to restrict all but essential travel and personal contact — we are temporarily halting production at our main continental Europe manufacturing sites."

Romania’s Minister of Public Finance Florin Citu told Digi 24, that he is in talks with Ford officials from Craiova to find solutions to help, after the two weeks when the company will support the payment of technical unemployment.

"The company will support technical unemployment for the first two weeks. We're in talks with Ford about how we can help after that. Our intention is that no company, as far as possible, will be permanently affected during this period, to support the whole industry so that we can overcome [the crisis],” said Citu.

Automobile Dacia, the largest company in Romania and part of Renault group, will stop production at the Mioveni plant starting March 19, as a preventive measure under the conditions of the COVID-19 epidemic.

"From March 19 12:00 until April 5, the Dacia plant ceases its activity as a preventive measure. No employee is infected, but there are employees who have contacted people from problem areas and who are now isolated at home," said Ion Iordache, deputy leader of the Dacia Automobile trade union.

During this period, employees will receive 85% of their wages in line with the collective labour contract.

Iordache stressed that Dacia has no problems with suppliers, and the plant is still stocked with components.