Foot traffic at Russia’s leading malls is collapsing because of the grinding crisis that has seen real incomes fall the first time in a decade and a half, according to the most accurate index measuring Russians' shopping habits.

Moscow boasts some of the biggest and most profitable malls in the world on a square-metre (sqm) basis. The spend per sqm at the modern Europa mall next to Kievskaya railway station in central Moscow is the highest in Europe and in the top five in the world, outstripping giants like the Mall of the World in Dubai and the Golden Resources Mall in Beijing. Indeed, colossal malls is very much an emerging market phenomenon; the biggest mall in the developed world is the US’ King of Prussia Mall in Pennsylvania that only ranks at number 30 on a Wikipedia list of the world’s largest.

As most emerging markets, and especially Russia, have only recently created a significant middle class that love to shop, these markets have gone straight from empty corner stores, or produkti in Russia, to titanic state-of-the-art buildings in strategic urban locations, each with billions of dollars of turnover a year.

As malls take about three years to build, the first half of 2015 saw a record number of new floor space come on the Russian market. With development starting in 2012 when the economy looked like it was bouncing back from the 2008 crash, in the first six months of this year 342,000 sqm of new mall space was added to Moscow, up 41% from the same period a year earlier, to bring the overall volume of quality shopping centres in the capital to 4.5mn sqm, according to real estate consultants Jones Lang LaSalle. This increase has pushed Moscow into first place in terms of supply of shopping centres in European cities in 2015, ahead of Paris, Madrid and St Petersburg, in that order.

The fact that so many modern malls are being built at once has created an opportunity for Russian consulting company Watcom to create a management tool for shopping centers based on shopping centers’ people counting solutions’ devices, which is unique to Russia, claims Roman Skorohodov, Watcom President. “We have created software that uses the 3D camera to count the number of people shopping in a mall in real time. This information is then correlated with sales in stores and other information including some personal data on location if a customer logs into the free WiFi in the building. You can then follow their movements and see how much time they are spending where, which again can be tied back to the revenue of the locations they are in.”

“For example, when the ruble dramatically devalued in December, the next day you saw the Shopping Index collapse as well,” adds Vakatova, referring to the company’s main shopping traffic index.

Thus, the index shows there is a very direct link between the health of the macroeconomy and shopping volumes. And things are going from bad to worse in Russia.

Foot traffic was already slowing from 2011, despite the fact real incomes were still rising, but that fall really started to accelerate in 2014, the year Western sanctions were imposed on Russia. And things are going to get even worse for the high-end retailers that populate these malls after real income growth turned negative in December last year for the first time since President Vladimir Putin took office in 2000.

As the index not only shows how many people there are in a mall at any one time, but also where they spend their time and how they spend their money, it also gives a pretty accurate insight into how spending habits are changing. “Buyers now increasingly study the price tag, try to buy at discounted rates, and actively respond to all kinds of promotions and bonuses to which chains and shopping malls carefully prepare for,” Watcom president Roman Skorokhodov said in a recent report.

As the chart below of superimposed annual cycles from January to New Year’s Day shows, the Shopping Index for Moscow’s leading malls has fallen every year since 2011, with the tumble accelerating in 2014. Faced with even more volatility on currency markets as the summer comes to an end, and the most recent report from Watcom showing nearly all the indicators are pointing downwards, the index for this year will only be worse. 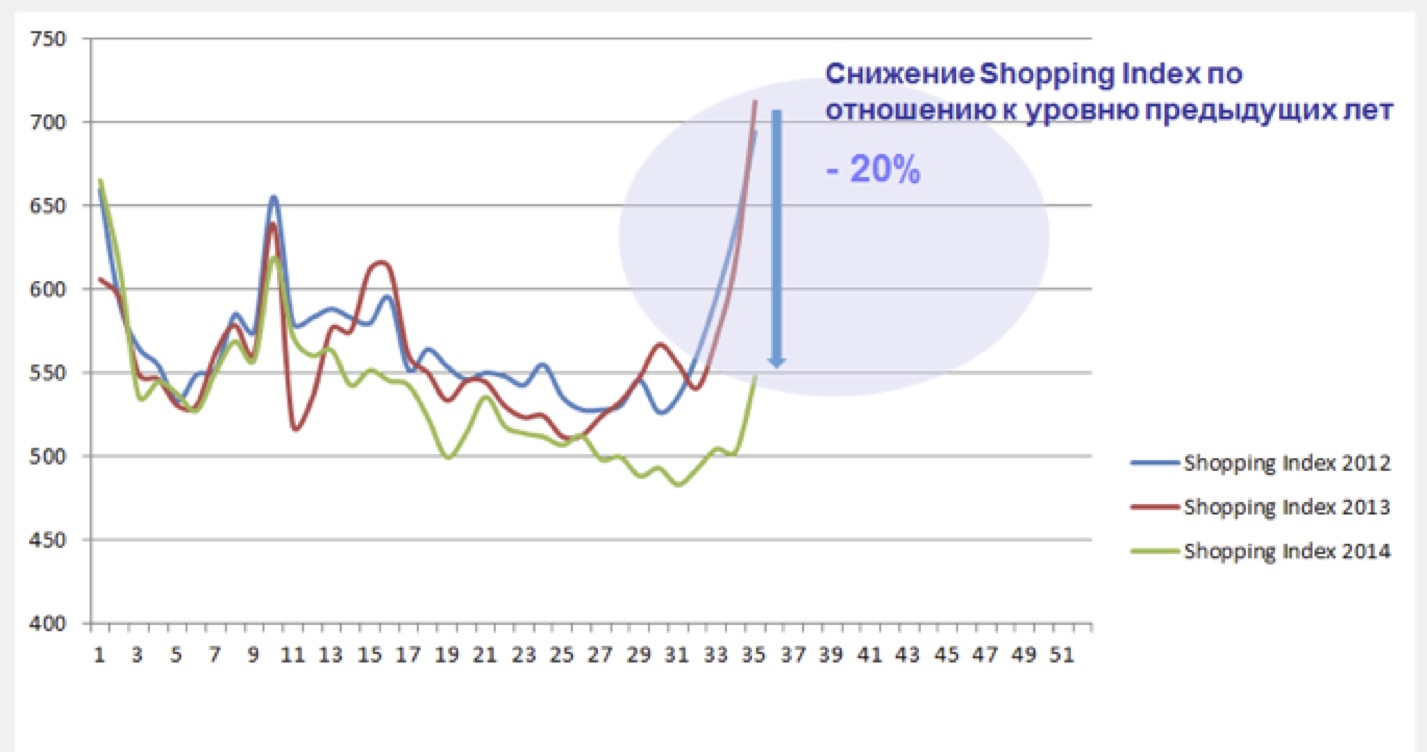 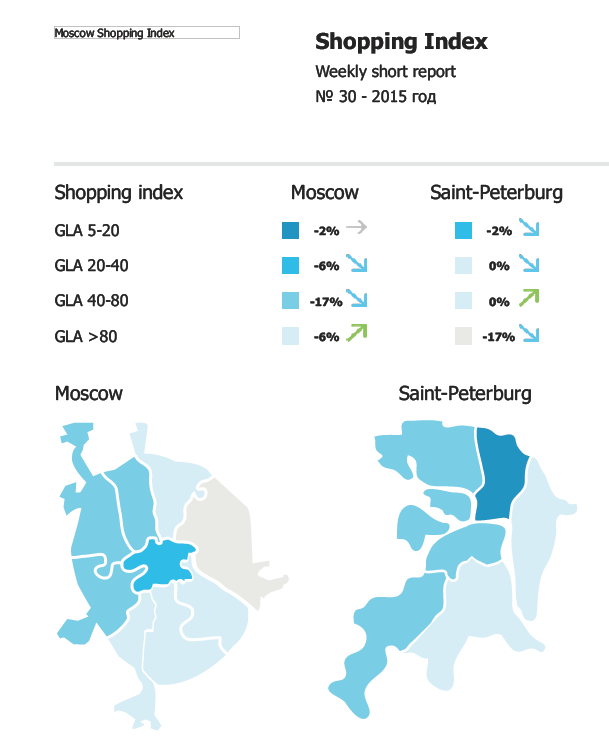