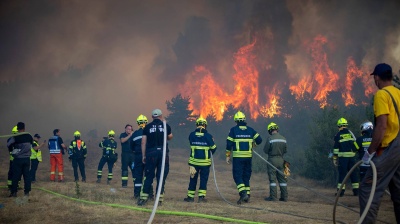 North Macedonia, helped by firefighters from the region, is still fighting raging wildfires caused by the extremely hot weather, which have been disastrous in the eastern part of the country.

Firefighters from Slovenia were among the first foreign teams to arrive in the country. Together with colleagues from Serbia, Austria, Bulgaria, Romania and Montenegro they have been fighting day and night with the fires that have been raging in several areas, mostly in the east, since the beginning of August.

Slovenia sent a new rotation of firefighters to North Macedonia on August 10 to replace a group of around 50 of their colleagues, who had been fighting wildfires in the eastern region of Berovo since last week.

“43 firefighters and nine members of the Civil Protection will replace the expedition that has been in North Macedonia since August 6. The second group is expected to return to Slovenia on August 17,” the Slovenian government said in the statement.

According to North Macedonia’s Crisis Management Centre, four major fires are still active, but all nearby villages are safe, while other fires are partially localised. Fires are active in the regions of the eastern town of Berovo, the central town of Prilep, as well as in Saraj and Petrovec near Skopje.

“The situation in North Macedonia remains serious. The fires are practically in the same places where the first expedition went. The wind is changing direction and the humidity remains low, which maintains the conditions for the fire to spread,” said Janez Bordon, head of the second group of Slovenian firefighters.

Marko Adamic, the operational manager of the second expedition, said that firefighters are working at least 12 hours a day in shifts in extremely difficult conditions. So far, only one firefighter has suffered a minor injury while repairing a fire engine.

He added that until midnight on August 9, the firefighters have been fighting fires for twenty hours, practically all day.

Adamic recalled that Slovenia experienced similar fires in 2003 and 2006, but in a much smaller area.

”Such fires are extremely dangerous, as they are unpredictable, so the management of the expedition must study the behaviour of the fires well and to plan appropriate ​​operation,” Adamic said.

Director of North Macedonia’s Crisis Management Centre, Stojance Angelov, said that all villages near the raging fires are secured and a buffer zone has been created through which the fires cannot pass.

"With the help of Austria, Slovenia and Bulgaria and the aircraft from Romania, we keep the situation under control," said Bekim Maksuti, head of the Protection and Rescue Directorate, who together with the EU ambassador in Skopje, David Gere, visited the Austrian firefighters' camp in the Pehcevo region on August 9.

So far, the police have arrested 14 people suspected of causing forest fires in several locations while 644 police officers have been engaged in extinguishing and preventing fires in the past 24 hours.

In the past ten days, since the outbreak of the fires, 1,500 members of the North Macedonia’s army have been also involved in dealing with fires.

Local citizens impressed by firefighters from Slovenia and Austria

Local citizens in the Pehcevo region are well organised in brigades from the towns that are affected by fires and they took care of the logistics, Deutsche Welle reported.

“Some carried water and sandwiches down the hills, others carried technical water with civilian vehicles and were helped by companies. The civilian brigades also helped to protect some agricultural property from fires," a local citizen from Pehcevo was cited by Deutsche Welle.

Local citizens also have words of praise for the Slovenian and Austrian firefighters.

"Slovenian firefighters had to cut down even the trees that had hung over the small narrow roads, so that their trucks could pass through," the residents were cited.

They think that after the firefighting drama ends, it would be appropriate for the authorities to name some streets in the towns in the eastern Malesevo region after the countries that help in the firefighting operations, such as "Austrian" and "Slovenian", as a small sign of respect and gratitude to their firefighters.

They were also impressed by the equipment and working discipline of the Austrian team.

“They [Austrians] are organised in brigades and came with an ambulance, a vehicle-kitchen and vehicle-toilet, jeeps, two- and four-wheel motors, as well as pools for accumulation of water. In Pehcevo they literally built a prefabricated hotel, located on a playground,” local citizens said, according to Deutsche Welle.

“There are not as many firehoses in all of North Macedonia as they have in several trucks," they added.

The government in Skopje declared a 30-day state of crisis on August 5 to prevent spreading the wildfires that engulfed parts of the country.

North Macedonia, as well as other countries in Southeast Europe, has been hit by a heatwave that has sent soaring temperatures to 40°C or higher in parts of the region, causing wildfires, but also threatening human health and disrupting some industries.

Several fires are also raging in the Montenegrin town of Niksic. Prime Minister Zdravko Krivokapic visited the city on August 9 saying that fire surveillance and control system will be the areas that should be regulated by the government. Montenegrin police arrested a 19-year man on suspicion of setting fire in an area of Niksic on August 8.

In Albania, firefighters and the armed forces have been battling fires since the end of July. Firefighters from neighbouring Kosovo arrived in the country to tackle a blaze that threatened traffic near the Kalimash tunnel.

On August 10 Kosovo’s President Vjosa Osmani expressed support for the countries of the region which have been affected by fires in recent days. In a tweet, Osmani wrote that the images from these places are "heartbreaking". Osmani also said that soldiers from the Kosovo Security Forces (KSF) will offer aid to Albania in the fight against fires.