Firebombs and fury on the streets of Tirana 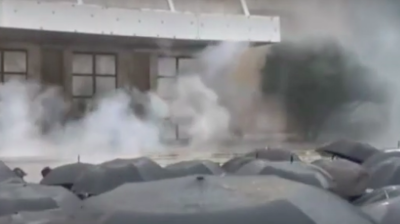 Smoke rises over a sea of umbrellas at the latest opposition protest in Tirana.
By bne IntelliNews May 13, 2019

Thousands of Albanian opposition supporters staged another protest on May 13 against the Socialist government of Prime Minister Edi Rama demanding a snap election and for an interim government to be formed until then.

For the second time in three days the protest erupted into violence. After a peaceful start some of the protesters started throwing smoke bombs and Molotov cocktails at the police.

Over the past three months the opposition has held repeated protests, aimed at forcing out Rama and his government, whom the opposition accuse of crime and corruption.

The leader of the main opposition party, the Democratic Party, Lulzim Basha, said that the protests will continue until the resignation of the current government.

The bad weather and the rain did not stop opposition supporters from holding a march, which started at the central Skenderbeg Square, and was supposed to end at the police directorate. But outside the parliament clashes broke out with police, as some protestors threw Molotov cocktails and flares at the central government building.

The Democratic Party issued a statement after the rally, denying that it had incited violence or sought to destabilise the country. It accused the government of winning the latest general election “by organised crime” and called reports by the interior ministry that the party had distributed Molotov cocktails to protesters “an abomination”.

Protests have been ongoing for several months, and opposition MPs also launched a boycott of the parliament. They have been stepped up in the last few days with thousands-strong protests on both May 11 and May 13.

Rama spoke to journalists on May 12 of the need for calm and restraint in the face of the protests.

Rama’s government has so far resisted calls for an early election. His Socialists increased their share of the vote in June 2017. The landslide result allowed them to form a government alone, without their former coalition partner, the Socialist Movement for Integration.

Under Rama’s first government, Albania secured EU candidate country status, and the prime minister has also sought to tackle graft and clean up the energy sector. However, accusations of links to the drugs trade continue to be levelled at the government.

The increasingly violent protests come as Tirana is seeking to get the nod for the start of EU accession negotiations.

The violence has dismayed Albania’s international partners. Before the latest rally, the British embassy in Tirana urged the opposition to hold peaceful protest and avoid violence. At the same time the embassy condemned the violence during the previous protest on May 11, which also turned violent, resulting in injuries for a dozen police officers and numerous protesters.

The Italian Embassy in Tirana called on opposition leaders to condemn violence and ensure that future protests be peaceful and stay within the legal framework.

Meanwhile the OSCE faced a backlash for its appeal to the opposition to avoid violence, as its premises were targeted on May 11 by demonstrators who gathered outside the building and daubed “Borchardt shame on you” on the wall — a message to the OSCE Ambassador to Tirana, Bernd Borchardt.

“Riots are not a substitute for democratic political engagement. They cut off any chance of dialogue — and therefore any chance of finding common ground. We call on all political leaders and on the citizens of Albania to show responsibility, demonstrate peacefully, and act with restraint. The OSCE will continue to support the democratic process in Albania,” said a statement from the body.

Yet it also warned of potential consequences should the political crisis in the country continue.

“A protraction of the crisis would inevitably hamper Albania’s domestic and foreign strategic priorities. Time has come to devise a domestic platform for dialogue which includes all relevant stakeholders, including all parties, civil society and academia, to overcome differences and work together in Albania's best interest,” the statement said.