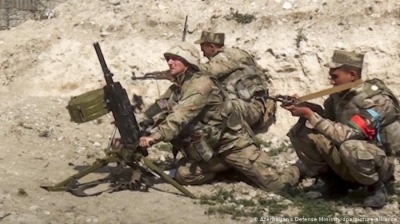 One Azerbaijani and two Armenian soldiers were killed in fighting on August 3.
By Ani Mejlumyan in Yerevan, Cavid Aga in Baku August 4, 2022
During clashes on August 3 on the Nagorno-Karabakh contact line, one Azerbaijani and two Armenian soldiers were killed, with each side blaming the other for the escalation of hostilities.
Karabakh's Defence Army, the Armenian enclave's military, said that the soldiers were killed by Azerbaijani drone attacks, which also left 14 other Karabakh servicemen wounded. According to Karabakh authorities, Azerbaijani forces also used mortars and grenade launchers to strike its frontline positions and one of its bases two days after trying unsuccessfully to advance into western Karabakh. Arayik Harutiunyan, the de facto president, has ordered a "partial mobilisation" of the disputed enclave.
Russian peacekeeping forces are "taking measures to stabilise the situation," a Karabakh defence ministry statement read.
The Russian peacekeeping leadership also released a statement, accusing Azerbaijan of violation of the ceasefire regime around Saribaba. "The command of the Russian peacekeeping contingent, together with representatives of the Azerbaijani and Armenian sides, are taking measures to stabilise the situation," the report said.

Armenian Foreign Minister Ararat Mirzoyan blamed the Azerbaijani side during a meeting with Andrzej Kasprzyk, head of a small OSCE mission monitoring the ceasefire regime in Karabakh. Mirzoyan said Baku attempts to "destabilise the situation".

The Karabakh foreign ministry condemned the "new wave of Azerbaijan's aggressive actions against Artsakh [the Armenian name for Karabakh]".

Karabakh's leadership conveyed  that Azerbaijan has demanded the closure of the Lachin corridor, which is the only overland link between Armenia and Karabakh, saying that "traffic must be organised along a new route shortly".

Armenia's Security Council secretary, Armen Grigoryan, dismissed the issue "It's not legitimate." He argued that under the agreement, Azerbaijan and Armenia must work out the new road by 2024.

The Azerbaijani Defence Ministry reported that an 18-year-old soldier was killed in the morning when its positions in the Lachin district west of Karabakh came under "intensive" fire. At the same time, Karabakh denied any clashes in Lachin and claimed that the road was open and safe.

Azerbaijan's Foreign Ministry afterwards blamed Armenia for the fighting, saying that Yerevan has not withdrawn its troops from Karabakh and is in breach of the ceasefire agreement reached after the 2020 Armenian-Azerbaijani war. However, since September, Armenia has  pledged to withdraw forces and not send fresh recruits.

The country's Ministry of Defence blamed Armenian authorities in Karabakh for reigniting the clashes. "Members of illegal Armenian armed detachments attempted to seize the Girkhgiz high ground, located on a mountain range covering the territory of the Kalbajar and Lachin regions, and establish new combat positions there," the ministry said.
Entitling its operation "Revenge", Azerbaijan claims to have captured Girkhgiz, as well as Saribaba and several advantageous heights. "During the operation, several combat positions of illegal Armenian armed detachments were destroyed, and an airstrike was inflicted on a military unit stationed in the Upper Oratagh settlement. As a result, the manpower of illegal Armenian detachments was annihilated and wounded, as well as several D-30 howitzers, military vehicles and a large amount of ammunition were destroyed," Anar Eyvazov, the ministry's spokesman said in a press meeting on 3 August.
Azerbaijani Foreign Affairs Minister Jeyhun Bayramov likewise blamed the Armenian side. "These provocations of the Armenian side are a gross violation of the tripartite declarations signed by the leaders of Azerbaijan, Armenia and Russia, as well as the declarations between the leaders of Azerbaijan and Armenia mediated by the President of the Council of the European Union, Charles Michel, and undermine mediation efforts," he said in a call with Toivo Klaar, Designated EU Special Representative for the South Caucasus.
#Nagorno-Karabakh
Read in IntelliNews Pro
Get IntelliNews Pro

Putin signs off annexation of four Ukrainian regions
1 day ago
Kremlin preparing for a protracted conflict by putting Russian economy onto a war footing
2 days ago
Hungary’s forint slides to new low after central bank ends tightening cycle
2 days ago
Slovak ministers criticise Czech border controls
2 days ago
Might Trussonomics be a branch of Erdoganomics?
2 days ago