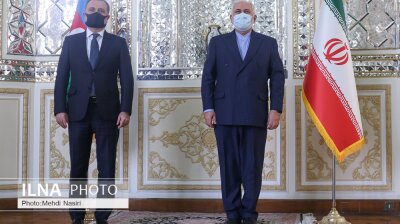 Azerbaijan's top diplomat hides the crease in the flag by standing in front of it.
By bne IntelIiNews December 9, 2020

The faux-pas was not the first of its kind made by Tehran’s Foreign Ministry, with its workers having previous form on sloppily unfurling the flag of a foreign country. However, the recent tensions between Tehran and Baku caused by the six-week Nagorno-Karabakh war, which at times appeared to come dangerously near the Iranian border, meant that there was extra spotlight on the visit of the Azerbaijani dignitary and thus additional embarrassment at the turn of events.

Social media lit up with images of Bayramov standing at some distance from Iranian counterpart Mohammad Javad Zarif in front of the Azerbaijani flag in what observers said seemed to be an attempt at hiding the crease, though Iranian officials claimed he was social distancing in line with pandemic requirements.

One social media user, Turkey-based journalist Cavid Aga, took the prompt and rolled out what he alleged was a long history of perceived insults to Azerbaijan.

Iran’s Foreign Ministry spokesman Saeed Khatibzadeh, meanwhile, sent out a tweet welcoming the Azerbaijani recapturing of territory in and around Nagorno-Karabakh from occupying Armenian forces.

"Iran welcomes the liberation of the occupied territories and the results achieved within the framework of the positive neighbourhood policy, and also supports a political settlement of the conflict," he wrote.

Around one-fifth of Iran's population of 84 million are Iranian-Azerbaijani. Iran is concerned that its trade routes via Armenia will not be disrupted by the eventual full settlement of the status of Nagorno-Karabakh and other elements of the peace deal yet to be developed. There are also concerns that Azerbaijan has good relations with Israel, thus a strengthening of Baku's hand in the Caucasus and along the Iranian border might, in that respect, be a worry to Iran.

Iran’s President Hassan Rouhani in his meeting with Azerbaijan’s top diplomat noted his satisfaction that the conflict was concluded with a ceasefire brokered by Russia and also welcomed the return of occupied territories to Azerbaijan.

Rouhani looked to a future in which “Iran's presence and participation in the reconstruction of the areas affected by the Nagorno-Karabakh war will be beneficial to both countries".

"Given the end of the Trump era in the United States and the coming to power of the new government in this country, we feel that countries will have better conditions for cooperation," he added.

Bayramov noted Azerbaijan’s full control over its border with Iran including the ancient Khodaafarin bridge, saying: "Azerbaijan's border with Iran is a border of friendship and development, and we believe that the revival of the border can create new cooperation projects for the two countries."

Japan is extending an emergency aid grant totalling $4.8mn to Armenia and Azerbaijan to help the two countries deal with the humanitarian crisis created by last autumn’s six-week conflict over the ... more

Yerevan believes that given the changes in the Nagorno-Karabakh status quo, Ankara no longer has any reason to keep its border with Armenia closed, Armenian Foreign Minister Ara Ayvazyan was quoted ... more

A social impact bond pilot programme announced on February 4 by the European Bank for Reconstruction and Development (EBRD) and the United Nations Development Programme (UNDP) ... more