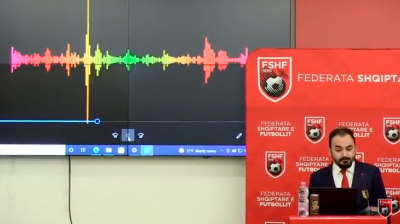 A spokesperson for the Albanian Football Federation plays a secretly recorded tape in which Tirana mayor pledges to "control football" and "piss on" the federation. / FShF
By bne IntelliNews January 25, 2022

An explosion was reported at the gate of the home of Albanian Football Federation (FShF) head Armand Duka late on January 24, just hours after the controversial election of the head of the Tirana Regional Football Association.

Duka has been locked in a very public conflict with Tirana mayor Erion Veliaj, who has accused the federation head of corruption and money laundering as well as rigging the February 24 vote. The FShF, meanwhile, released an audio recording the day before the vote in which Veliaj vows to “control football” and “piss on” the FShF.

Dozens of police officers were sent to Duka’s home in the port city of Durres, where the explosion damaged the gate but no injuries were reported. Duka’s wife was inside the house at the time of the blast, while Duka was on his way home from Tirana.

The Tirana mayor, who was live on air when news of the explosion broke, denied any connection to the blast and called for an investigation.

Duka “is my opponent and not my enemy”, he told journalists, according to a post on his Facebook page.

Albanian President Ilir Meta condemned the attack. “I strongly condemn the terrorist act in the family of the President of the Albanian Football Federation, Mr. Armando Duka and I call on all law enforcement institutions to clarify with transparency this very serious event,” Meta wrote in a statement on Facebook.

“Such a criminal act, following verbal violence, blackmail and public pressure, adds to the urgency to stop as soon as possible and bring the perpetrators and perpetrators to justice.”

The explosion took place just days ahead of the FShF’s leadership election on March 2, in which Duka is set to face a challenge from sports commentator Dritan Shakohoxha.

The head of the Tirana Regional Football Association is one of the officials who will take part in the upcoming vote. Despite Valiaj’s support for Eduard Prodani, as voiced in the recording, the winning candidate was Krenar Alimehmeti.

Critics of Duka, who has headed the FShF for two decades, claim he has changed the voting system to ensure he is reelected.

Veliaj has been urging prosecutors to launch an investigation into Duka. He has made numerous claims against the FShF head, including of corruption, money laundering and match fixing.

This is not the first time similar accusations have been levelled against Duka during his two decades as head of the FShF, but he has never been investigated by prosecutors.

In the tape released ahead of the January 24 vote, Veliaj made clear his intention to take on the FShF.

“Forget about UEFA or FIFA coming here, not even Jesus or Muhammad can stop my fight,” he is heard saying.

“I am going to do whatever it takes to make their life miserable through prosecutors and SPAK,” he added, referring to the Special Prosecution Office against Corruption.

“I am the mayor. I want to control football. Football is one of the rooms in my house,” he says later in the recording.

After its release, Veliaj confirmed the authenticity of the recording and said he stand behind his comments.

Also on January 24, the mayor talked of removing the “sludge” from football and announced his meeting with international sports lawyer Efraim Barak.

“As [Court of Arbitration for Sport] CAS Arbitrator and UEFA vice chair of Legal Committee, he will help us clean Albanian Sports. As Tirana Club co-owner, the Municipality will join forces with all actors to change the corrupt practices in sports!” he tweeted.

The recording was posted on the website of the FShF, which was closed down by a hacker attack on January 24. The association called the hack a “scandalous political attack” and said it will “continue to denounce all political interventions, attacks and pressures and will not retreat in the face of blackmail and threats of power”.