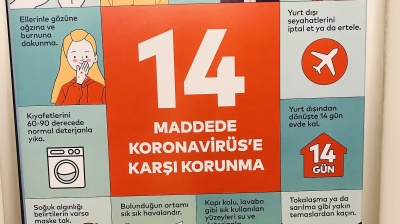 A poster offering 14 tips from the Istanbul Municipality on how to avoid a coronavirus infection. / Maurice Flesier, CC-BY-SA 4.0
By bne IntelIiNews May 19, 2021

Questions continue to swirl about Turkey’s claim that its 19-day “full lockdown” brought about a steep decline in coronavirus infections that might convince countries to remove it from their pandemic red lists and recommend to their citizens that a Turkish summer holiday can be considered as an option for a vacation.

Turkish Medical Association (TTB) secretary general Vedat Bulut has suggested that the sharp drop in recorded infections could have been caused by a decrease in the number of tests performed for the virus, rather than the success of the lockdown or vaccination programme. The doubts follow the embarrassing situation that arose near the end of last year when Turkey’s health ministry had to acknowledge that it was not including asymptomatic coronavirus cases in its daily data on infections, despite the fact that people carrying coronavirus, but showing no symptoms of the illness, can still spread it.

The lockdown, which provided exceptions for the manufacturing and construction industries, ran from April 29 to May 17.

Officials want to see the daily rate of new infections fall to below 5,000 before they push for a full opening up of the international tourism industry in an attempt at avoiding the devastating losses it suffered in the first year of the pandemic—the industry, which accounts for around 11% of Turkish GDP, saw its earnings fall from $34bn in 2019 to around $12bn in 2020

Speaking to Ahval last week with the daily infection count then standing at around 15,000, the TTB’s Bulut said: “The number of COVID-19 tests in Turkey has been restricted… Only 10% of tests conducted were coming out positive from the get-go. And because daily testing dropped to the 190,000s, there are only 15,000 cases. This [infection rate decline] has to do with less testing.”

Ahval also reported that according to the health ministry, Turkey ran around 200,000 tests per day last week, down from over 320,000 in mid-April.

Bulut was further cited as saying that unless Turkey can procure substantially more vaccine shots, widespread immunity from coronavirus will not be possible before spring 2022. The TTB says Turkey’s health system has the capacity to administer 1-2mn vaccines per day, but on average has been issuing about 200,000 shots daily due to chronic supply issues. Promised Chinese vaccines have not arrived at anything like the rate Beijing said they would.

Around 13% of Turkey’s 83mn-strong population has been fully vaccinated.

In a video message marking the end of the Islamic holy month of Ramadan and the start of the Eid al-Fitr holiday last week, Turkish President Recep Tayyip Erdogan attempted to talk up the success of the lockdown, saying: “Good days are ahead even though we are having a bitter holiday due to the problems caused by the pandemic.”

His upbeat message did not, however, reflect the mood among most Turkish medical specialists. Sebnem Korur Fincanci, chair of the TTB and an internationally recognised forensics expert, complained to Al-Monitor on May 12: “There is no vaccination campaign. If you don’t have the vaccine, then you can’t have a vaccination campaign.”

He added: “In Turkey, we are in a totally dark space without any transparency. Unfortunately, the Turkish community has lost their trust in the government’s fight against the pandemic because they have hidden so many facts from the public and have continued to hide the truth.”

One observation about what the government said was a “full lockdown” came from the Confederation of Progressive Trade Unions of Turkey. It estimated that at least 60% of employees in the country continued working during it.

Separately, it became clear late on May 18 that a delegation of senior Turkish officials that visited Moscow failed to persuade Russia to lift a one-and-a-half-month ban on tourist flights to Turkey that was announced by Moscow in April amid the country’s surge in COVID-19 cases.

Millions of Russians usually holiday in Turkey each year, particularly on the Mediterranean coast.

Erdogan dispatched Ibrahim Kalin, a top adviser, along with Tourism Minister Mehmet Nuri Ersoy to Russia to resolve the issue. But Russia has extended the ban, which was set to ease on June 1, by a further two weeks.

The extension of the flight ban has caused more speculation that Russia is signalling its displeasure to Turkey over Ankara’s support for Ukraine over Russia’s 2014 annexation of Crimea and the Donbas.

Turkey’s sale of armed drones to Ukraine has caused some irritation in Moscow.

Kalin said there were some positive outcomes to the talks with Russian officials. He said that the two sides had reached a deal to bring Russia’s Sputnik V vaccine to Turkey “as soon as possible as well as on steps to be taken for the tourism season, the starting of flights and speeding up the process”.

Turkey later said it had reached an agreement with Russia to acquire 50mn doses of Sputnik V.