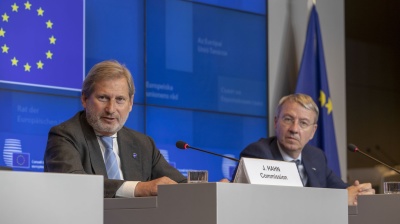 EU foreign ministers failed on June 18 to take a firm decision on setting a date for EU-aspirants Albania and North Macedonia to start accession talks, saying they will reassess the issue no later than October.

This came as no surprise as previous media information suggested that the German Bundestag is not ready to make a quick decision on the issue. North Macedonia’s Prime Minister Zoran Zaev said last week that he was sure that the country will start EU accession talks this year, but that Germany’s parliament will only make a decision on the issue in September.

“In light of the limited time available and the importance of the matter, the Council will revert to the issue with a view to reaching a clear and substantive decision as soon as possible and no later than October 2019,” the European Council said in the statement following the meeting of EU foreign ministers.

“The Council takes a good note of the Commission's recommendation to open accession negotiations with North Macedonia and Albania based on its positive evaluation of the progress made and of the fulfillment of the conditions identified by the Council," it said.

The Council praised North Macedonia for its historic Prespa Agreement that resolved the long-standing name issue with Greece as well as the Friendship Treaty with Bulgaria, but mentioned nothing about Albania.

The Council reaffirmed its commitment to enlargement, which remains a key policy of the European Union.

However, Enlargement Commissioner Johannes Hahn warned of the risk that delaying a decision could have on the EU's credibility among aspiring member states.

However, he added, "It is unfortunate that a minority of European member states were not able to support the Commission's clear proposal to open accession negotiations with Albania, North Macedonia already today ... our collective credibility is at stake and our incentives and leverage for tough reforms across the region are equally at stake."

Meanwhile Reuters reported that Cyprus threatened to veto any agreement on future enlargement unless the EU toughens its line on Turkish drilling for gas and oil in the Eastern Mediterranean.

In June 2018, a meeting of the EU’s General Affairs Council ended with a majority of member states in favour of allowing negotiations to begin about membership for Albania and North Macedonia, but due to the resistance from France and the Netherlands no date was set.