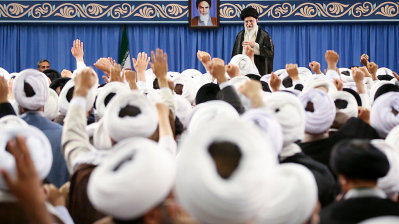 Khamenei seen on July 16 meeting with Friday Prayer leaders from across Iran.
By bne IntelliNews July 16, 2019

Iran’s supreme leader, Ayatollah Ali Khamenei, on July 16 told Europe it was “insolent” for opposing Iran’s reduction of its commitments to the nuclear deal while failing to live up to its own obligations under the accord.

Saying Iran would continue to cut its nuclear agreement commitments, he stated on his website: “According to our foreign minister, Europe made 11 commitments, none of which they abided by. We abided by our commitments and even beyond them. Now that we’ve begun to reduce our commitments, they oppose it. How insolent! You didn’t abide by your commitments!”

Top of Iran’s concerns is Europe’s distinct failure to do anything significant to protect Iranian trade in the face of severe US sanctions designed to force Tehran to negotiate a tougher and broader nuclear deal. Though the European powers say they are content to adhere to the present agreement, struck in 2015 and supposed to protect Iran from heavy sanctions in return for the restriction of its nuclear programme to civilian status, they are yet to make a major move to help stop Washington strangling the Islamic Republic’s economy.

Instex creeps forward
The US attempt to drive all of Iran’s lifeline oil exports off world markets, commenced in May, has brought Europe’s lack of assistance for Iran into sharper focus. The operational status of Europe’s long-delayed Instrument in Support of Trade Exchanges (Instex) special purpose vehicle—originally established with the idea of enabling commercial parties who want to trade with Iran to avoid US sanctions but so far only made available for non-sanctionable trades—does appear to have crept forward but there is as yet little sign that it is developing into a trade channel that will persuade the Iranians that they should stop heading down the path towards a nuclear deal exit.

Instex is presently undertaking “very careful” due diligence on the processing of several transactions, according to the EU’s top diplomat, Federica Mogherini—but the sticking point remains that Iran wants it to deal in oil barter trades to beat US sanctions placed on Tehran.

After a meeting of EU member state foreign ministers in Brussels on July 15, Mogherini could only say that “the issue of whether or not Instex will deal with oil is a discussion that is ongoing among the shareholders [and] the shareholders of Instex are currently discussing whether the instrument can be used for that as well or not.”

Although Mogherini said the EU believed Iran was yet to show any “significant noncompliance” with the nuclear accord, and that breaches it had made were reversible, an Instex or other breakthrough is very likely needed soon to prevent the situation from deteriorating.

Mogherini added in a statement that she never expected the establishment of Instex to take so long, but noted: “We had unanimity among the Member States [at the meeting] on the need to, on the one side, make the instrument we have put in place… Instex… faster and more operational to have legitimate trade with Iran.”

Trade channel “open to third countries”
Russia and non-EU European states have previously said they would like to use Instex, but Moscow later said it did not need to make the move as it was conducting trade directly.

Instex was created by France, the UK and Germany (the three European signatories to the nuclear deal) after Mogherini announced Europe would create such a mechanism following the US withdrawal from the nuclear deal and reimposition of unilateral sanctions.

“It is complicated. It has proven to be complicated. I can tell you that when I announced Instex in September last year on the margins of the UN General Assembly after a Joint Commission [meeting], we definitely expected this to be faster.”

She added: “So it was not only an Iranian expectation back then, but it was also our expectation that it would have gone faster than it has proven to be. But the issues at stake have been particularly complicated. So, on Iranian expectations: we are doing our best and we hope that this will be enough for Iranian public opinion and the Iranian authorities.”

Zarif on ballistic missiles
Separately, Iran’s Foreign Minister Mohammad Javad Zarif said on July 15 that Iran would only be willing to possibly discuss its ballistic missile programme in negotiations with the US if Washington stops selling weapons to Persian Gulf Arab kingdoms, Associated Press reported.

In an NBC News interview cited by the news agency, Zarif said American weaponry "is going into our region, making our region ready to explode. So, if they want to talk about our missiles, they need first to stop selling all these weapons".

US likely to bristle at new Iran plan to put satellite in orbit
Turkey’s Halkbank exposed to US court fine of $1.8bn within two weeks if prosecutor’s request accepted
‘People of assassinated general’s home province will pay $3mn bounty to anyone who kills Trump’ says Iranian MP