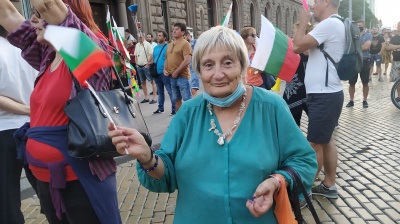 For the 64th day running hundreds of thousands of Bulgarians protested on September 10.
By Denitsa Koseva in Sofia September 10, 2020

As Bulgaria enters the third month of protests demanding the resignations of government and chief prosecutor Ivan Geshev, MEP Clare Daly of the European United Left

#Bulgaria is the most corrupt state in the EU & its people the most impoverished. The protesters on the streets of #Sofia want to know when #EU is going to stop emboldening & enabling the thugs in power there, and they deserve an answer - not more shameful EU fence-sitting @OCCRP pic.twitter.com/dNyWY9U3X0

— Clare Daly (@ClareDalyMEP) September 10, 2020 the EC to stop funding Bulgarian "gangsters" — she was referring to the government of Prime Minister Boyko Borissov — and accusing the European authorities of either being incompetent or intentionally backing Borissov.

For the 64th day running hundreds of thousands of Bulgarians protested on September 10, disgusted by the evidence of top-level corruption and the alleged involvement of the government and Geshev with controversial politicians and businessmen.

“If the [European] Commission thinks the progress in Bulgaria has been good over the 13 years – well, my conclusion can only be that you’re either grossly incompetent or that you are completely subservient to the interests of Borissov because of his connections with certain influential groupings in this parliament,” Daly said, addressing the European Commission Vice-President Vera Jourova. 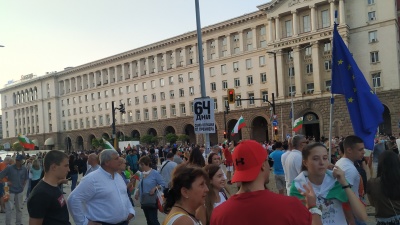 Jourova talked to a session of the European Parliament’s Committee on Civil Liberties, Justice and Home Affairs (LIBE) on September 10, pointing out that Bulgaria has made some progress in the past years but that the protests show the importance of good leadership to the people in Bulgaria.

Daly accused Borissov of turning Bulgaria into the most corrupt EU member state as well as the poorest.

“We have irrefutable evidence of his [Borissov’s] connection and interaction with the prosecutor Geshev, giving orders about who should be prosecuted, covering up for his own allegations of money laundering in Spain and so on, harassment of judges. Now the people are off their knees, we have mass arrests, people being beaten, pepper sprayed, a riot police without proper identification, reputable members of the society being imprisoned, on hunger strike and we talk about monitoring and progress,” Daly said.

“People on the streets of Sofia today want to know are you going to argue for that to be imposed. That the CVM [Cooperation and Verification Mechanism] will be strictly monitored. They also want to know are we going to stop funding these thugs, because European money is emboldening and enabling these people to engage in all-scale corruption which is penalising the Bulgarian citizens. I have to say I think this is absolute disgrace,” Daly also said.

Her statement was widely applauded by Bulgarians who have become angry with the complete failure of the European Commission to intervene since the start of the protests.

Meanwhile, Jourova said that the EC will prepare the first report on Bulgaria under the rule of law mechanism on September 23. Jourova also urged the authorities in Sofia to seek advice from the Council of Europe’s Venice Commission on legislative revisions regarding the accountability of the prosecutor general, including safeguarding judicial independence in line with the Venice Commission's recommendations.

“Are you blind, EU?” has become a popular poster during the protests and several times protesters have stopped by the delegation of the EU to demand a reaction from European institutions.

At the same time, the authorities in Sofia are accusing protesters of being criminals or paid by criminals. On September 9, Borissov said that the mafia is demanding his resignation, therefore he will not resign. His statement provoked outrage and people started posting photos of young people with their children among protesters, ironically calling them “the mafia”. 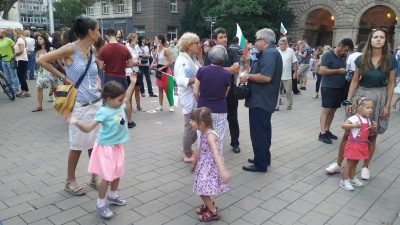 On the 64th day of protests, announced as the “second supreme national uprising” by its organisers, the Poisonous Trio, tens of thousands people yelled that the authorities have got wrong the address of the mafia, referring to Borissov’s statement.

Meanwhile, President Rumen Radev once again stood up for the protesters, writing on Facebook that the protest belongs to everyone and that the Bulgarian people, not smugglers nor the mafia, have taken onto the streets.

Radev called on everyone to preserve the peace and not to react to provocations. A week earlier, the first supreme national uprising ended with dozens wounded and arrested as the protest turned violent. 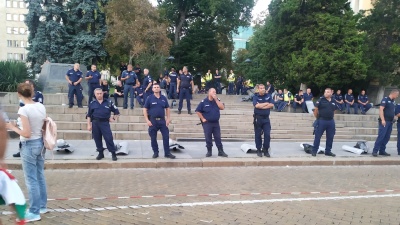 Moreover, 47% of people say that early elections are necessary, while 37% say they are not needed. The majority of people also support the protests – 62% either completely or partially support them. However, they are rather pessimistic about the outcome of the protests. Only 33% believe they will bring positive change, while 42% say that they will not improve the situation.

Sofia streets empty as most of Bulgaria put in coronavirus “red zone”
BALKAN BLOG: What’s wrong with the Macedonian language?
COMMENT: Why the Balkan region should be on investors’ radar screens