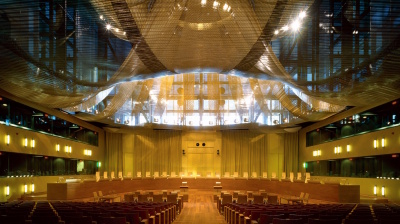 The CJEU ruling creates a risk of plunging the Polish legal system into chaos, according to Poland’s Prime Minister Mateusz Morawiecki.
By Wojciech Kosc in Warsaw October 7, 2021

Transferring a judge to work in another court or in a different division of the same court could “undermine the principles of the irremovability of judges and judicial independence,” the Court of Justice of the European Union (CJEU) ruled on October 6.

The ruling is yet another blow to the Polish government’s attempts at overhauling the country’s judiciary. Critics at home and abroad say that the so-called reforms are the government’s way to subject judges to political control. Poland’s rightwing administration dismisses those claims, saying the changes are there to improve the efficiency of the courts.

The case links to other key elements of the government-sponsored changes in the Polish judiciary, particularly the legitimacy of the KRS, a judge-appointing body, and the so-called Chamber of Extraordinary Control and Public Affairs in the Supreme Court.

Both were established as a result of the government reforms, with doubts persisting as to the bodies' impartiality and independence.

In 2018, Polish judge Waldemar Zurek was transferred without his consent from one division of a regional court in Krakow to another division of that court.

Zurek claimed that the transfer was the court’s president acting in retaliation for his critical views of the government’s judiciary reforms. The judge appealed against the transfer to the KRS – which dismissed the appeal – and then to the Supreme Court’s Chamber of Extraordinary Control.

The Chamber dismissed Zurek’s case in a sitting by a single judge who did not review the case file or call for a hearing of Zurek himself. The judge was appointed by the KRS “in clear disregard of the fundamental procedural rules for the appointment of judges to the [Supreme Court],” the CJEU said in the ruling.

The PM referred to the CJEU’s statement that the Supreme Court’s dismissal of Zurek’s case “must be declared null and void” because of the doubts regarding the appointment by the KRS of the judge who reviewed the case.

The appointment “took place in clear breach of fundamental rules concerning the establishment and functioning of the judicial system,” the CJEU said.

That might lead to a barrage of cases challenging any ruling carried out by judges appointed by the KRS, adding to the growing uncertainties as to the legality of decisions issued by Polish courts.

Poland keeps adding to the uncertainty by openly questioning the primacy of EU law over domestic regulations concerning the judiciary.

In an earlier case, the CJEU ruled in July that Poland’s system of disciplining judges was “not compatible” with EU law. Poland said it would ignore the ruling.

“The rulings of the CJEU must be respected across the EU,” Vice-President for Values and Transparency Vera Jourova said in reaction to Polish defiance.

The Polish government is using the spat over the judiciary with the Commission to drum up nationalist and anti-EU rhetoric, especially as the EU keeps hinting that Poland may have problems receiving funding from the bloc’s pandemic recovery funds and the next budget.

Poland stands to receive €36bn in grants and loans from the pandemic recovery fund. The money is the cornerstone of the PiS’ government’s plan for an economic leap forward and one of the key elements of the strategy to win an unprecedented third term in office in the election due in 2023.