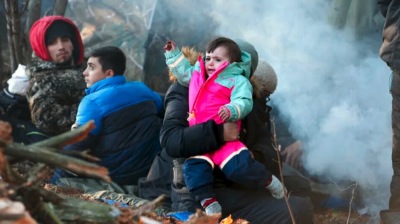 Winter is approaching and temperatures have fallen below zero, threatening to create a humanitarian crisis out of the clash between migrants and Polish border guards.
By bne IntelliNews November 11, 2021

The EU accused Belarus' President Alexander Lukashenko of running a “gangster state” and is preparing fresh sanctions ahead of a meeting of the foreign council on November 15.

Between 2,000 and 4,000 refugees are camped out in the woods on the Belarusian-Polish border where 15,000 Polish border guards, police and troops have been mustered to prevent them crossing into the EU.

With temperatures falling to below zero the migrants have little in the way of food, water or medical attention and some are warning of an escalating humanitarian crisis.

Reports have also emerged of Polish police brutality as they use force to keep the migrants back. Some of the refugees have been using tools like spades and wire-cutters to try to break down a barbed wire fence erected in recent months by the Polish authorities. Others have cut down trees and lain them across the fence in an effort to create a breach.

The legality of repulsing the migrants, mostly from the Middle East, has also been questioned as the Polish authorities are ignoring the usual asylum application protocols. The Polish parliament recently passed an emergency law that empowers border guards to use limited force and deems the attempts to enter Poland “illegal.”

The crisis has divided Polish society and Polish human rights activists have arrived at the scene to distribute food, water and warm clothes.

The migrants have protested over the Polish efforts to stop them entering the country, saying they only want to transit Poland on their way to Germany, where they will apply for asylum.

Poland and the EU have accused Lukashenko of using the migrants as a tool in a “brutal hybrid war” and so the migrants' efforts to seek refuge in the EU are not legitimate, which is grounds for new sanctions.

The bloc's 27 ambassadors discussed possible new sanctions at a meeting in Brussels on November 10, which may be put to the vote by the foreign council next week.

He described images from the Belarusian border, where people are stuck in freezing conditions with little food and shelter, as "horrific" but said the EU could not be blackmailed, Reuters reports.

Lukashenko has denied “weaponising” migrants and has been supported by Russia, who pointed out the EU’s failure to stick to its own rules on accepting applications for asylum.

"It is apparent that a humanitarian catastrophe is looming against the background of Europeans' reluctance to demonstrate commitment to their European values," Kremlin spokesman Dmitry Peskov said on November 10 as cited by Reuters.

German Chancellor Angela Merkel spoke by phone with Russian President Vladimir Putin on the same day and urged him to use his influence with Lukashenko to bring the showdown to an end, a request that was brushed off by the Kremlin.

“The Belarusian regime’s exploitation of migrants against the European Union is inhumane and completely unacceptable,” Merkel told Putin, her spokesman said. The Russian leader told Merkel that the EU should discuss the issue with Lukashenko, according to a Kremlin readout.

The EU are framing the crisis not as refugees seeking asylum, but as the Belarusian authorities engaging in people trafficking, which will give grounds for additional sanctions on Belarus, according to an official familiar with the plans as cited by Bloomberg.

The bloc is discussing targeting airlines involved in bringing in refugees, including restrictions on Belarus’s national airline, Belavia, and 29 individuals connected to the regime, according to EU diplomats.

Russia’s Aeroflot and Turkish Airlines could also be targeted in the new package, the official said, which have participated in flying a reported 10,000 migrants to the Belarusian capital. Polish Prime Minister Mateusz Morawiecki has called for an emergency summit for the 27-member bloc. The new penalties could be announced – jointly with the US and possibly the UK – early next month, the Bloomberg source said.

“This is a political crisis, created to destabilise the EU,” Morawiecki told reporters in Warsaw after talks with European Council President Charles Michel. “This is a manifestation of national terrorism, revenge by Lukashenko for our support for democratic elections in Belarus.”

Thousands of people have converged on the border this week, where razor-wire fences and Polish soldiers have repeatedly blocked their entry.

"It was not a calm night. Indeed, there were many attempts to breach the Polish border," Polish Defence Minister Mariusz Blaszczak told broadcaster PR1 as cited by Reuters.

The Polish border guards service reported 599 illegal border crossing attempts on Tuesday, with 9 people detained and 48 sent back. Blaszczak said the force of Polish soldiers stationed at the border had been strengthened to 15,000 from 12,000.

After midnight, two groups of migrants were turned back. One that was around 200 people near the town of Bialowieza and another of around two dozen were turned back near Dubicze Cerkiewne, a spokeswoman told Reuters.

Both Lithuania and Poland have now declared states of emergency as the crisis escalates and draws worldwide attention. Lithuania also reported 281 migrants were turned back last night, the highest figure since August, when such pushbacks began. At least seven migrants have died in the last few months attempting to cross the border, according to reports.

Lukashenko has engineered the crisis to shore up his weak support in the country, where he has been under pressure after winning the massively falsified presidential elections on August 9 last year.

By causing the crisis Lukashenko hopes to portray the EU as hypocritical and brutal and the reported beatings of migrants by Polish police at the border have played into his hands. Lukashenko's government blames Europe and the United States for the plight of the people stranded at the border, which Minsk portrays as innocents fleeing the brutal warzones in the Middle East for refuge in Germany.

By choosing to back Lukashenko over the protesters last summer Moscow has backed itself into a corner and has little control over Lukashenko, who remains a loose cannon. In the meantime, Russia continues to work on finalising its Union State deal with Belarus that would bring the two economies closer together into something like a single market. Putin and Lukashenko met earlier this week to continue talks of deepening the workings of the Union State.