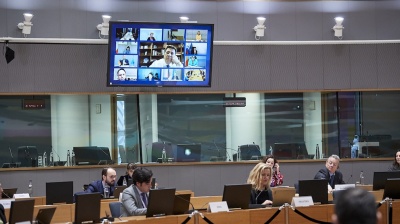 The decision to open accession negotiations with the two Western Balkan countries was made at a high level video conference of European affairs ministers.
By Valentina Dimitrievska in Skopje March 24, 2020

The decision comes several months after EU leaders failed to agree on starting accession negotiations at a summit last October, dealing a crushing blow to the two countries in question, and also raising concerns in other candidate countries from the Western Balkans about their progress towards EU accession.

The European Commission again recommended the launch of EU accession negotiations with both countries on March 2, after they achieved tangible results in key areas. The reports were published after the Commission presented a new enlargement methodology in February initiated by France after French President Emmanuel Macron vetoed the start of EU negotiations with Skopje and Tirana last October, seeking a new approach to the enlargement process.

“I wholeheartedly congratulate both countries. This also sends a loud and clear message to the Western Balkans: your future is in the EU,” EU Enlargement Commissioner Oliver Varhelyi said in a tweet.

"Today's political agreement to open accession negotiations with Albania and the Republic of Macedonia is a recognition of the significant reform efforts made by these two countries," said the statement from European affairs ministers.

The decision, which was taken unanimously, still has to be formalised by the European Council, most probably on March 26, which will allow the formal start of the negotiation process. No date for the start of negotiations has been set so far.

"A historic decision in these difficult times for our people," leader of North Macedonia's ruling Social Democrats and ex-PM Zoran Zaev said.

Now the European Commission should start drafting the documents needed to convene the first intergovernmental conference as soon as possible for each of the two countries.

However, Varhelyi was cited by MIA as saying that the negotiation framework is expected to be presented by the Commission in June, after which the intergovernmental conferences could start.

Albania and North Macedonia must negotiate 35 chapters to join the EU. According to the new methodology, the more candidates advance in their reforms, the more they will advance in the accession process.

BALKAN BLOG: Why is it so difficult to set an election date in North Macedonia?

BALKAN BLOG: Why is it so difficult to set an election date in North Macedonia?
Movie night at the airport
North Macedonia extends state of emergency for two weeks