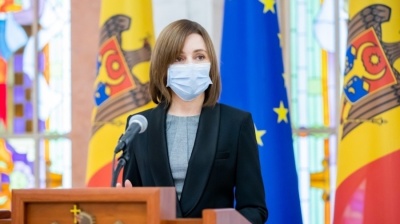 Moldova is receiving a €60mn grant from the European Union to help with its energy crisis, Moldovan President Maia Sandu said on October 27, according to a statement on the presidency website.

After Gazprom cut its deliveries on October 1, the country has been paying around €1mn per day to purchase around 1mn cubic metres of gas from other sources and keep the pressure in its pipelines from falling below the minimum threshold. Moldova is currently using between 7mn and 8mn cubic metres of gas each day, which is expected to rise to between 12mn and 15mn cubic metres as winter approaches.

"The European Union provides the Republic of Moldova with €60mn for managing the gas supply crisis," the presidency statement said.

"The non-reimbursable assistance is provided as a result of a constant dialogue between the Moldovan authorities and the European Union."

A European Commission official quoted by Politico confirmed the €60mn would be a grant rather than a loan and that further financing could be released, but declined to provide details.

Moldova is under pressure to secure a natural gas contract to cover its consumption after November 1, from Gazprom or any other supplier. Gazprom is conditioning a new long-term contract on inking an agreement on the repayment of $709mn historic debt and meanwhile charges spot prices ($790 per 1,000 cubic metres in October) that Moldova is struggling to pay.

Meanwhile, PGNiG and DXT Commodities won the auction held by Moldova’s Energocom on October 27 and will deliver 1.5mn cubic metres on October 28.

Kremlin spokesman Dmitry Peskov on October 27 denied a report by the Financial Times that Gazprom had asked Moldova to adjust its economic relations with the EU in exchange for a favourable gas price.

"No political aspects exist nor can there be any. These are purely commercial talks. There is a need [for gas], a business proposal is on the table, so is a proposed discount, and there is also the problem of accumulated debt. All this is commercial in nature, there is no politicisation here and there cannot be," Peskov stressed, quoted by Tass

The reaction of the Russian official came after the Financial Times wrote that Gazprom proposed to Moldova to amend the agreement on duty-free trade with the EU and to postpone the adoption of the third energy package agreed with Brussels through the EU-Moldova Association Agreement signed in June 2014, which provides for the liberalisation of the gas market in Moldova.

Gazprom announced on October 27 that the negotiations with the Moldovan authorities are continuing in St. Petersburg.

The parties continued their negotiations on the terms and conditions of the new contract for Russian gas supplies to Moldova, as well as current issues pertaining to the cooperation between Gazprom and Moldovagaz, the press release reads without providing any details on the outcome of the negotiations.

Moldova requires approximately 1.3bn cubic metres (bcm) of natural gas every year, or about 2.9bcm if the separatist republic of Transnistria is included.

Headline inflation hits 13.9% y/y and is still far from peak in Moldova