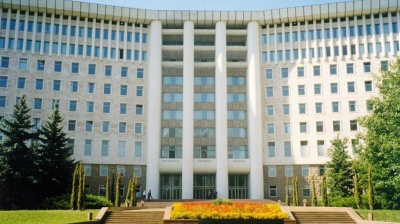 Moldova’s western development partners have accused the parliament of breaching the constitution after lawmakers voted to remove the head of the Constitutional Court.

The attempt by the Socialist Party (PSRM) to alter the composition of the Constitutional Court was triggered by the court’s approval of President Maia Sandu’s request for snap elections. The PSRM led by former president Igor Dodon is visibly irritated by the prospect of early elections, which polls show would most likely result in a victory for Sandu’s Party of Action and Solidarity (PAS).

Although visibly breaching constitutional provisions (except for the first step that is a mere political statement), experts point out that the parliament’s dismissal of Manole has slim chances of succeeding as under the constitution, Constitutional Court members can be dismissed only by a vote of the court’s members.

Sandu and the PAS have called for mass protests in front of the Constitutional Court on April 26 “to defend the constitution”.

EU High Representative Josep Borrell issued a statement urging all political actors in Moldova to respect the decisions of the Constitutional Court.

"Parliament and the executive power must … respect the role of the Constitutional Court as the gatekeeper of the constitution, even when they are dissatisfied with its decisions," Borrell said in a statement.

"Friday's votes and declarations, therefore, constitute a blatant attack on the constitutional order of the Republic of Moldova and are an attempt to undermine the rule of law,” he added.

President of the Venice Commission, Gianni Buquicchio, recommended that the Moldovan parliament “annul its declaration and unconstitutional decisions and to respect the previous and future decisions of the Constitutional Court, even if it does not agree with them”.

Three of the six members of Moldova’s Constitutional Court have a political affiliation, as the country’s legislation does not specifically forbid this. Manole ran on the lists of the pro-EU platform ACUM, which included Sandu’s PAS, in the last general elections, but did not get an MP seat and was eventually nominated for the Constitutional Court under the June 2019 agreement between Socialists and ACUM.

The situation is further complicated by the Venice Commission itself, which in 2019 ruled that the initial decisions of Moldova’s Constitutional Court in the days of June 7-8 were not in line with the constitution.

The Constitutional Court took steps in response to the parliament’s actions: a decision to suspend the sacking of Manole has been signed by ad-interim court president Liuba Sova at the request of opposition MP Sergiu Litvinenko. The final decision to invalidate Manole’s dismissal will be voted on by the remaining five court members (excluding Manole herself).

Moldova’s headline inflation rises to 3.1% y/y and is going up

Turkey, China in firing line as Biden holds summit with Nato allies
6 hours ago
Hungary’s most powerful oligarch says he is just a lightning rod for attacks on Orban
1 day ago
US sanctions on Russia’s OFZ local debt come into force
1 day ago
Moscow back on lockdown as coronavirus infection rate surges again
1 day ago
Lukashenko pushing illegal Iraqi refugees over the border into Lithuania
1 day ago