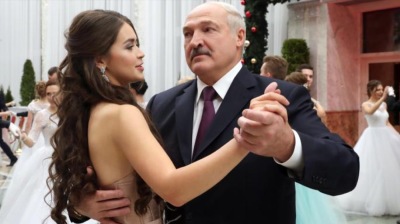 The 22 year old Maria Vasilevich and former Miss Belarus became the youngest candidate to win a seat in this week's parliamentary elections
By bne IntelliNews November 20, 2019

The European Union (EU) has joined the chorus of critics of Belarus’ November 17 elections for the lower chamber of parliament, which are widely believed to be rubber-stamped by the nation's authorities.

"[The] parliamentary elections in Belarus took place in an overall calm atmosphere. Nevertheless, it was a lost opportunity to conduct elections fully in line with international standards," the EU's External Action spokesperson said in a statement on November 18.

The preliminary assessment of the OSCE/ODIHR International Election Observation Mission states that there was an overall disregard for fundamental freedoms of assembly, association and expression.

In addition, the OSCE/ODIHR notes that a limited amount of campaigning took place, within a restrictive environment that, overall, did not provide for a meaningful or competitive political contest. A number of key OSCE/ODIHR and the Council of Europe’s Venice Commission recommendations remain unaddressed.

“In light of the upcoming presidential elections in 2020, it is crucial the Belarusian authorities resume work on comprehensive electoral reform without delay. This will also be key for achieving the full potential of EU-Belarus relations, building on the positive cooperation of the last three years,” the OSCE/ODIHR said in a statement. The European Union is committed to supporting a stable, democratic, sovereign and prosperous future of the country, for the benefit of the people of Belarus, and will continue its work with this objective firmly in mind.”

Separately the 22 year old Maria Vasilevich and former Miss Belarus became the youngest candidate to win a seat in parliament during the elections, the Times reports. The former beauty queen has been reportedly romantically involved with Lukashenko since she was crowned Miss Belarus in 2018 and has frequently been seen in public with the strong man leader.

An “Italian strike” is hobbling production at Belarus’ biggest companies

Lukashenko warns of war, closes the Western borders… not

Bell rings on Bucharest Stock Exchange's first session after elevation to emerging market status, opening up the Romanian capital market to funds with billions of euros under management.

A significant proportion of the e-commerce goods originating from China arrive in Central and Eastern Europe from the Shenzhen area, putting Budapest in a strong position in the region's trade with China.

US flips Security Council the bird on Iran

Both sides claim ownership of Goce Delcev, who fought for an independent Macedonia at the turn of the 20th century.

Romania officially becomes an emerging market
9 hours ago
Hackers release another 1,000 Belarusian police officers' names after OMON again ratchets up violence at weekend rallies
9 hours ago
Cargolux launches Shenzhen-Budapest cargo flights
10 hours ago
US flips Security Council the bird on Iran
1 day ago
Skopje tries to fix row with Bulgaria over revolutionary hero that could derail EU bid
2 days ago