EU and US officials try to defuse Kosovo-Serbia tensions 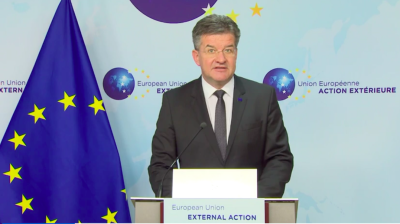 Mixed messages from officials after meetings in Brussels with EU special representative Miroslav Lajcak.
By Valentina Dimitrievska in Skopje September 29, 2021

The EU and the US tried on September 29 to find a solution to tensions between Kosovo and Serbia sparked by Pristina’s introduction of reciprocity for car number plates, requiring Serbian drivers to replace their plates with temporary ones to enter Kosovo.

The outcome of the talks is unclear. The Serbian delegation in talks with Pristina said late on September 29 that no agreement was reached during the meeting in Brussels, news agency Tanjug reported. Earlier, the Kosovan negotiator had claimed there was a deal.

Tensions in the north of Kosovo followed Pristina’s decision on September 20 to force Serbian cars to replace their license plates with temporary ones to enter Kosovo. Since then, ethnic Serbs, unhappy with the decision, have been blocking the roads to the Jarinje and Brnjak border crossings to Serbia.

Pristina's chief negotiator Besnik Bislimi said earlier that an agreement in principle had been reached in Brussels on the return of freedom of movement between the two sides, and that Belgrade's consent was awaited.

After the meeting with EU special representative Miroslav Lajcak, Bislimi told reporters that there would be no trilateral meeting with Belgrade, but that a draft of three proposals was agreed upon, Kosovan broadcaster RTK said.

The draft envisages the withdrawal of Kosovo special units, deployment of Nato-led KFOR forces in the north and removal of barricades at administrative crossings.

However, Tanjug reported that the Serbian delegation said no agreement has been reached yet.

Belgrade's chief negotiator, Petar Petkovic, ended bilateral talks with Lajcak shortly before 9 pm. Petkovic did not give statements to the media. The Belgrade delegation could not confirm whether the talks in Brussels will continue on September 30, Tanjug reported.

EU spokesperson Peter Stano said earlier in a tweet that the meeting between Kosovo and Serbia’s chief negotiators facilitated by Lajcak is not over and negotiations continue in Brussels to find a solution to the current crisis in the north of Kosovo.

US ambassador to Belgrade Anthony Godfrey said in a tweet that he is in close touch with US Deputy Assistant Secretary of State Gabriel Escobar, who is in Brussels to show support for the EU-led dialogue.

“This work is not finished but good progress has been made. Parties must be flexible and continue the work to take this to the finish line. The time is now,” Godfrey said.

Meanwhile, the European Commission President Ursula von der Leyen, who visited Pristina on September 29 as part of her regional tour, said it is vital that Kosovo and Serbia normalise their relations.

“We have been discussing the issues. I must say that I am very concerned about the current crisis. It is important to de-escalate and to return to the negotiating table to find a sustainable solution,” von der Leyen said in Pristina.

She also noted that the only way to find a solution is through the EU-facilitated dialogue.

“That is the only platform to resolve the current crisis. We will stay in touch, we have discussed that, because I want to see Kosovo progress and this is only possible through cooperation. So let us work together on that,” she said.

Following her visit Pristina, von der Leyen arrived in Belgrade for talks with Serbian President Aleksandar Vucic and other officials.

Kosovo unilaterally declared independence from Serbia in 2008, but it is still not recognised by Belgrade as a separate state. Both are engaged in EU-mediated talks on the normalisation of their relations, but no major progress has been achieved so far. The talks stalled again due to the latest incident.