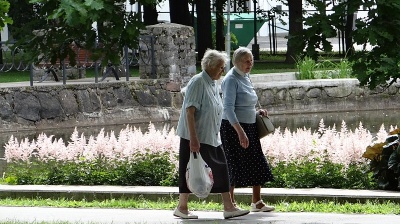 Two women in a park in Estonia's second city Tartu.
By Levente Szilagyi in Budapest August 14, 2019

The centre-right Estonian government agreed on the pension reform bill on Monday, but differences remain over a pension hike, local media reported. The draft bill could be submitted before the cabinet in a few weeks, when details about the reforms and their schedule will be clearer.

After a three-hour meeting earlier this week, the governing parties, Centre, EKRE and Isamaa, agreed to cover all pension reforms in one bill rather than two or more.

Finance Minister Martin Helme of the Ekre party also argued for addressing the pension reform in one bill. "Major reforms must be done boldly and in one fell swoop," he was quoted as saying.

The government plans to submit the bill before parliament in the autumn, which means it could come into force on January 1.

The new pension scheme would allow people to opt out of the second pillar or suspend payments from 2020, reinstating the status quo before 2010. The second pillar comprises mandatory contributions to pension pots from employees, as against employers (first pillar) or private pension schemes (third pillar).

The scheme, launched in 2010, made payments mandatory for those born in 1983 or after, while those born between 1942 and 1982 had the choice to opt out when the scheme was first introduced.

At present employees pay 33% social tax, 20% going on pensions including state pensions. In the case of the second pillar, the person pays 2% towards their own pot, with the employer doing same, making 16% the actual amount taken from a monthly salary on pensions.

Making the second pillar optional was a central part of the Conservative-nationalist Isamaa’s (Pro Patria) election manifesto ahead of the March election.They argued that it would improve competitiveness as the second pillar tends to underperform in terms of returns.

The International Monetary Fund (IMF) in a recent visit to the country expressed concern over the plan to reform the second pillar. The IMF said that the removal of the second pillar would increase the burden on future generations further and lead to people cashing out their savings.

It recommended the three-party government coalition conduct an in-depth assessment of the current pension scheme before embarking on the reforms.

The reform plans of the government would have clear budgetary implications in the short run.

The IMF said that cashing out saved balances could boost current consumption, fiscal revenue, and economic growth in the short term but reduce future pension entitlements in the long term.

The government would use the windfall for extraordinary pension hike under a separate a legislation, but differences remain over the timing of the hike between coalition parties.

Isamaa leader Helir-Valdor Seeder has said that the hike cannot be contingent on second pillar reform, noting that the state budget cannot immediately cover the increase.

Martin Helme agreed that the pension hike and the reform of the second pillar while not formally linked, are invevitably related. It also remains a question on how many people choose to opt out. The finance minister expects that the number of people opting out will not be able to cover the full cost of pension hikes.