Estonia and Latvia pull out of China-CEEC cooperation format 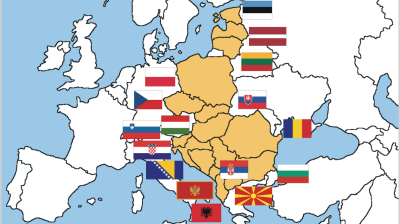 Estonia and Latvia have followed Lithuania's lead and will withdraw from the Beijing-led CEEC format for cooperation platform between Central and Eastern European countries and China. / bne IntelliNews
By Linas Jegelevicius in Vilnius August 14, 2022

Estonia and Latvia have followed Lithuania's lead and will withdraw from the Beijing-led CEEC format for cooperation platform between Central and Eastern European countries and China. The platform, which was once called the 17+1, now has 14 members plus China.

The move comes amid Western criticism of China over escalating military pressure on democratically ruled Taiwan, which China claims as its own territory, and Beijing's strengthening of ties with Russia during the invasion of Ukraine.

As reported by bne IntelliNews, relations between Lithuania and China worsened after the former allowed Taiwan to open a de facto embassy late last year.

Latvia's foreign ministry said the country's continued participation in the China group was "no longer in line with our strategic objectives in the current international environment".

Estonia will continue to work towards constructive and pragmatic relations with China, which includes advancing EU-China relations in line with the rules-based international order and values such as human rights, spokespeople for the Estonian Ministry of Foreign Affairs told BNS, a Baltic newswire, on August 12.

Both countries said they would continue to work towards "constructive and pragmatic relations with China" while respecting the rules-based international order and human rights.

The Chinese embassies in Riga, Latvia and Tallinn, Estonia did not immediately respond to requests for comment.

The EU members of the now 14+1 format are Bulgaria, Croatia, the Czech Republic, Greece, Hungary, Poland, Romania, Slovakia and Slovenia are among countries that remain in the cooperation format. The West Balkan members are Serbia, Albania, North Macedonia, Montenegro and Bosnia and Herzegovina.

The Czech Republic's foreign ministry said in May the promise of large Chinese investments and mutually beneficial trade were not being fulfilled, following calls within the country's parliament to quit the group.

The Baltic states participated in the cooperation format of Central and Eastern Europe and China from 2012. Estonia has not attended any of the meetings of the format after the summit last February.

Lithuania pulled out of the format in May 2021. The country is now embroiled in a rolling trade and diplomatic spat with China.

ING: ECB hikes by a historic 75bp, more hikes in the works

Nuclear power's share dropped to record low in OECD, but solar jumped to record highs thanks to hot summer
ING: ECB hikes by a historic 75bp, more hikes in the works
Eastern EU governments under pressure to act on rising living costs