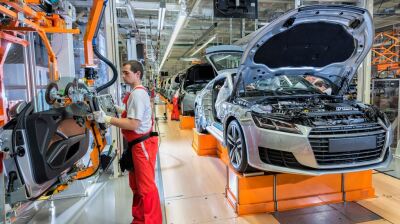 CEE's dominant production sector has been much less affected overall by the pandemic.
By bne IntelliNews August 2, 2021

Noting the region’s outstanding resilience during the pandemic and the expected positive impact from the EU’s recovery fund, Erste Group revised upwards its forecast for all the Central and Eastern Europe (CEE) countries where it operates, a region the Austrian financial group expects to outperform as a whole the euro area’s expected 4.4% advance this year.

For Romania, Erste Group revised upward its forecast for this year’s economic growth from 4.2% (in Q1) to 6.7%. The Austrian group expects the growth rate will remain robust in Romania in 2022 at +4.5%.

“Of course, it remains to be seen how the pandemic will evolve, "said Bernd Spalt, CEO of Erste Group.

As regards the causes of the resilience already demonstrated by the region, Erste Group says that although quarantine measures have significantly affected services and trade, the production sector – which traditionally plays a key role in the CEE region – has been much less affected overall.

Confidence in the region is also reflected in the evolution of its stock markets: In the first half of the year, the market capitalization of the main CEE indices increased by 17.6% as a weighted average, it also points out.

Furthermore, the group’s analysts carried out an estimate of the Recovery and Resilience Facility’s impact on each country’s GDP, which is projected at between 1.2% GDP in 2026 (when the facility expires) in the Czech Republic and 2.9% in Romania.

The size of the disbursements under the facility differs significantly, with the biggest packages measured as a share of GDP being in Romania (13.4%) and Croatia (13%) and the lowest in the Czech Republic (3.2%).