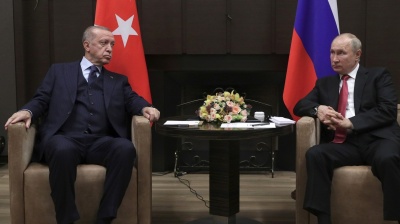 Erdogan (left) and Putin at the Sochi summit.
By bne IntelIiNews September 30, 2021

Turkey is considering fighter jet and submarine cooperation with Russia and has also proposed that the two countries work together on the construction of two more nuclear power plants, news agencies quoted Turkish President Recep Tayyip Erdogan as saying on his return flight from his September 29 talks with Russian counterpart Vladimir Putin.

As a Nato member, Turkey will have to tread carefully as regards defence cooperation with the Kremlin if it is not to invoke further US sanctions. Ankara is already under light US sanctions as regards its acquisition of S-400 missile defence systems from Russia, while the US has imposed a ban on Turkey obtaining F-35 stealth fighter jets—fifth generation planes with which Turkey was planning to upgrade its air force—and Congress is running an unofficial embargo on major US arms sales to the Turks. Erdogan is known for playing the US and Russia off each other and following his trip for the UN General Assembly speeches in New York last week—during which he was not afforded an opportunity to meet US President Joe Biden—he expressed dissatisfaction at the state of relations with the Biden administration and stated that Turkey still intended to buy a second batch of S-400s. His latest moves towards closer ties with Russia may be designed to push Biden to cut his regime some slack.

In his comments to journalists after the talks with Putin in Sochi, Erdogan did not further mention the S-400s but said that Turkey would not back down to US pressure and went on to point to other possible defence projects with Russia. "We had the opportunity to discuss comprehensively what steps to take in the production of plane engines, what steps to take regarding fighter jets," he reportedly said, adding that submarine and ship construction were other areas where there could be joint work.

Russia's Rosatom is building a nuclear power plant in Akkuyu in southern Turkey, set to go into operation in 2023, and Erdogan was reported as saying he proposed that Russia collaborate on the construction of two more such plants.

Erdogan also confirmed he would meet Biden at the G20 in Rome at the end of October, as well as at the United Nations' climate summit in Glasgow, and would discuss the $1.4bn that Turkey has paid for F-35 jets that it can no longer buy.

"We will discuss all relations including military, political, economic, commercial," he was cited as saying.

On September 28, Biden’s ambassador nominee for Ankara, former Arizona Republican senator Jeff Flake, was critical of Turkey’s plans to purchase Russian defence weapons and of its authoritarian regime during a Senate Foreign Relations Committee hearing in the process of confirming his appointment.

Flake said he would push Erdogan to change course. “If confirmed [as ambassador], I will consistently reiterate that disposing of this [S-400] system is the path to removing CAATSA sanctions,” Flake said, referring to the 2017 Countering America’s Adversaries Through Sanctions Act. He added: “I will also warn Turkey that any future purchase of Russian weapons risks triggering further CAATSA sanctions, in addition to those already imposed.”

Senator Bob Menendez (Democrat-New Jersey), chair of the Senate Foreign Relations Committee, said he would continue to oppose arms sales to Turkey unless there was a shift in its position on purchasing the S-400 missile defence systems.

“I see no arm sales going to Turkey unless there is a dramatic change around, on the S-400 and moving forward,” Menendez said.

Menendez also hit out at Turkey’s restrictions on freedom of the press and the Erdogan regime’s crackdown on government critics.

“Erdogan’s repression is unbefitting of a democracy and unbefitting of a Nato ally. Democracies don’t jail journalists, intimidate academics, and infringe upon freedom of religion,” Menendez said. “They don’t renege on their commitments to stop violence against women and they don’t put political opponents in prison.”

“I'm troubled by Ankara’s democratic backsliding, and the negative trajectory in terms of freedom of expression, freedom of association and peaceful assembly in Turkey,” Flake responded. “If confirmed, I will challenge Turkey to uphold its domestic and international human rights commitments, while also pushing Turkey to live up to its status as a Nato ally.”