Erdogan reportedly pulls out of COP26 after security downgrade 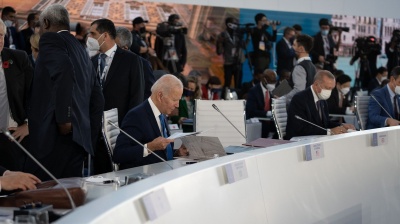 Erdogan (right) and Biden (centre) seen at a working session of the G20 summit in Rome.
By bne IntelIiNews October 31, 2021

Turkish President Recep Tayyip Erdogan has reportedly cancelled his planned appearance in Glasgow for the COP26 UN Climate Change Conference because of a lower security protocol applied for the Turkish delegation.

Two people familiar with the issue briefed Middle East Eye (MEE) on the situation on October 31.

Erdogan was due to lead the Turkish delegation on November 1 and 2 in the climate change negotiations being attended by world leaders including US President Joe Biden and French President Emmanuel Macron.

MEE reported: “Two people told MEE that the organisers put restrictions on the size of the Turkish delegation as well as motorised vehicles that could be used by the Turkish officials during the conference, which raised security concerns.

“The host British government at the weekend backtracked and told its Turkish counterparts that it would apply the same protocol used by the US president to Erdogan, seemingly an update in terms of the security details.

“However, the British government changed its mind again and Erdogan decided to cancel, according to the same sources.”

Separately, Erdogan and Biden agreed during talks on October 31 to set up a joint mechanism to improve strained ties between Ankara and Washington, Turkish media have reported.

Ahead of the Rome meeting, journalists were briefed by a US official that Biden would warn Erdogan that any precipitous actions would not benefit US-Turkish relations. After the meeting Turkey’s state-run Anadolu Agency reported a Turkish official as saying that the talks were held in a "very positive" atmosphere.

Erdogan in late October ordered 10 envoys, including the US ambassador to Ankara, to be declared "persona non grata" for seeking the release of jailed philanthropist Osman Kavala, though he later withdrew the threat to expel them. "Certainly the president [Biden] will indicate that we need to find a way to avoid crises like that one going forward and precipitous action is not going to benefit the US-Turkey partnership and alliance," the US official told correspondents, Reuters reported.

Erdogan has requested that the US sell Turkey F-16 fighter jets given Washington’s ban on selling Ankara the more advanced F-35s in response to the Turkish purchase of Russian S-400 missile defence systems said to pose a security threat to Nato military hardware. News agencies reported that at the meeting Biden told Erdogan that his request for the F-16s had to go through a process in the US, while Erdogan said his counterpart was "positive" toward the jet sale.

The US Congress has been running an unofficial boycott on major arms sales to Turkey in response to matters including the S-400 acquisition and Ankara’s human rights record.

"President Biden reaffirmed our defense partnership and Turkey's importance as a NATO Ally, but noted U.S. concerns over Turkey's possession of the Russian S-400 missile system," the White House said in a statement after the meeting.

Speaking to reporters in Rome, Erdogan said that he reiterated to Biden Turkey's opposition to US support for the Syrian Kurdish YPG—a US ally in the fight against Islamic State in northeast Syria but designated a terrorist group by Ankara.

"Undoubtedly, I conveyed to him [Biden] our sadness with the support these terrorist organisations in Syria... are receiving from the United States," Erdogan said. "I also told him these issues were steps that could damage our solidarity."