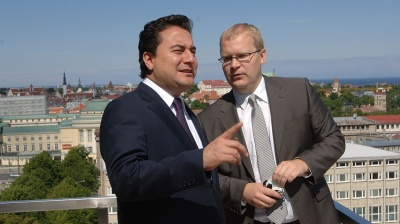 Babacan (left) was yet to respond to the claims from Erdogan.
By bne IntelliNews December 8, 2019

Erdogan has pressed his claims just as the local media is full of reports that former Prime Minister Ahmet Davutoglu and former economy czar Ali Babacan look set to launch new political parties to challenge the president’s 17-year-rule and ruling Justice and Development Party (AKP). He did not back up his allegations of corruption centring on how fraud supposedly tainted a loan to Istanbul Sehir University from state-owned Halkbank, totalling Turkish lira (TRY) 417mn ($72mn).

Erdogan also made a further accusation in which he said Babacan and ex-economy minister Mehmet Simsek signed a suspect decree allocating state land to the university.

“Halkbank gave a considerably big loan to them. They didn’t pay it back and asked for a restructuring of the loan that has no warrant,” Erdogan said in a speech on December 8, as reported by Bloomberg. “I don’t want to go into details, but there is a fraud against Halkbank.”

Davutoglu was one of the founders of the university, which is reportedly struggling to repay the loan. Halkbank has taken the university to court to try to retrieve the money, and the school’s assets have been frozen.

Babacan, who served as vice premier for the economy and as foreign minister, cut ties with the AKP in July. Davutoglu served as prime minister and chairman of the AKP from 2014 to 2016.

In local reports, Davutoglu was cited as denying the accusations and demanding that Erdogan and his family declare their assets and any changes in their holdings in the course of the president’s political career. Babacan was yet to comment on the allegations.

In October, US prosecutors charged Halkbank with taking part in a conspiracy that helped Iran evade US sanctions and access $20bn in frozen oil revenue. Erdogan has been implicated in the case but has denied any wrongdoing. Halkbank has been described by the prosecution as “fugitive” as it has failed to respond to requests to appear at a Manhattan court. The bank is contesting whether the court has jurisdiction to hear the case. The judge has said it must appear and enter a plea before its argument on this matter can be heard.

Under pressure since the Turkish lira crisis of last year plunged Turkey into recession, Erdogan has seen his AKP lose a string of municipalities to the opposition this year including Ankara and Istanbul. The strongman’s economic competence is now under scrutiny as he seeks to use credit expansions to rapidly get Turkey back to healthy growth levels.