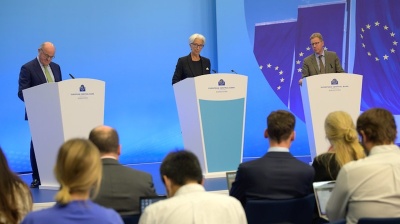 The European Central Bank (ECB) raised interest rates for the first time in over 11 years on July 21 in a bid to contain rising inflation in the Eurozone.

The rate hike came in response to accelerating inflation. Consumer prices in the Eurozone grew by 8.6% year on year in June – more than four times the bank’s 2% target, and a record high. Inflation has been driven by high food and energy prices, which were pushed up by supply concerns after Russia’s invasion of Ukraine.

ECB President Christine Lagarde told a press conference on July 21 that the rate increases were intended to ensure inflation returns to target over the medium term.

She warned that the ECB expects inflation to remain “undesirably high” for some time, “owing to continued pressures from energy and food prices and pipeline pressures in the pricing chain”.

Another factor is higher inflationary pressures stemming from the depreciation of the euro exchange rate. Fears of a looming recession have caused the euro to fall to a 20-year low against the US dollar.

While the ECB president forecast energy costs to stabilise and supply bottlenecks ease, supporting the return of inflation to its target, she warned of downside risks to growth and upside risks to inflation.

Lagarde also commented on the bank’s decision to make a larger than expected rate hike in July, saying it was “based on our updated assessment of inflation risks and the reinforced support provided by the TPI for the effective transmission of monetary policy”.

Further hikes can be expected, as the bank said such a move "will be appropriate”. However, it didn’t offer more elaborate guidance, saying this would be decided on a meeting-by-meeting basis.

ING’s global head of macro Carsten Brzeski commented that while rates were hiked “with a bang”, softening forward guidance “is a more dovish tweak compared with the aggressive forward guidance from the June meeting”.

“This decision shows that the hawks must have got cold feet, fearing that the promised higher-than-25bp rate hike in September would be washed away by the looming recession. The agreement on a TPI had to be paid for by the doves with a stronger rate hike,” wrote Brzeski in a note.

“We all know that today’s rate hike will not bring down inflation in the short run – not even on the demand side of the economy, which will react much more to the looming recession than to any ECB action. The hike, as well as potential further hikes, are all aimed at bringing down inflation expectations and to restore the ECB’s damaged reputation and credibility as an inflation fighter,” he added.

There were signs of divisions in the Eurozone recently, amid reports the ECB was under pressure from Austria, Germany and the Netherlands to raise rates, while a number of southern European Eurozone members were worried about the impact that would have on the cost of debt.

Five of the new EU member states from Central and Southeast Europe – the Baltic states, Slovenia and Slovakia – are Eurozone members.

Matej Hornak, an analyst at Slovenska Sporitelna, said as quoted by the Slovak News Agency that he expected the appetite for rate hikes may gradually diminish with the growing risk of a slowdown in economic activity, which, in addition to lower GDP growth, will also bring lower inflation growth.

"The inflation rate in the Eurozone has been well above the 2% inflation target for several months, which led to markets expecting monetary tightening. However, market behaviour is not waiting for an official announcement from central bankers, the strength of expectations is already showing, and we have seen the price of money rise in the market, which has ultimately been reflected in interest rates on banking products," said Hornak told the Slovak News Agency.

Croatia is expected to adopt the European single currency on January 1, 2023, and Bulgaria aims to join a year later.