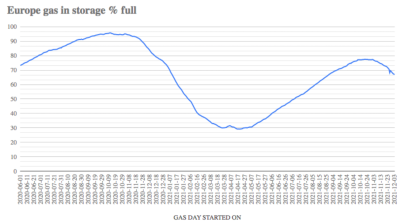 This is the coldest November in five years and European gas storage levels have already started to fall from an already low level of 77% full in October. / bne IntelliNews
By bne IntelliNews December 6, 2021

Europe will create its own strategic gas reserves in order to hedge against future gas shortages, European Energy Commissioner Kadri Simson said at a press conference on December 3.

The EU Council made the decision at a meeting at the energy minister level, reports Neft i Kapital. Simson stated that the EC is working on a package of proposals to regulate the natural gas and hydrogen markets. She also added that, despite the extremely high prices of natural gas in 2021, hub-linked gas prices will deliver gas more cheaply to the Continent over time than long-term oil-linked prices.

Since most of northern Europe abandoned long-term contracts and bought gas on the spot market, following the introduction of the so-called third energy package, EU members have saved and estimated $70bn on their gas purchases. But as NewsBase.com reported, the EU has given up almost all those gains in the current gas crisis after prices on the spot market soared to briefly touch $2,000 per thousand cubic metres this autumn – as much as ten times higher than the average gas prices on the spot market.

The gas crisis remains concentrated amongst the northern EU member states that have been faster to adopt the energy reforms and move to buying on the spot market; many of the southern states have kept their long-term contracts with Gazprom and as such, have been better protected from the spike in prices. The advent of TurkStream, which went online in January, has also served to insulate those states along its route from the price shock.

And the gas crisis is not over. While Russia’s national gas giant Gazprom has been producing at 1.5bcm per day – close to its maximum capacity – and has increased exports by some 10% year on year, it is not selling enough gas to meet market demand.

Because of the V-shaped market of the last two years, there has been a perfect storm of coincidences that have combined to cause a crunch in supplies on the European gas market. The upshot is Europe went into this winter with the lowest level of storage in a decade at 77% at its peak in October, but as this November has been the coldest in the last five years, those stored supplies of gas are already falling, according to the AGSI+ aggregated gas storage inventory.

The alternative that Russia might propose to creating expensive EU strategic gas reserves would be to give approval to Gazprom's new Nord Stream 2 gas pipeline that taps large reserves in the Arctic Yamal fields complex. The new pipeline has a nameplate capacity of some 55 bcm per year and Europe is estimated to have a 15 bcm deficit. The pipeline has already been filled with technical gas and could literally be turned on tomorrow. However, Russia has made it very clear it wants not only to see Nord Stream 2 operational but also wants Europe to commit to new long-term contracts to ensure Russia’s gas export business to Europe for the next decade, something that the EU is trying to avoid as it sees gas demand falling in the next decade as it transitions further to renewables as part of its Green Deal. Given the cost of gas bought on the open market, analysts expect some sort of fudge to appear.

“The European Commission appears committed to its Energy Transition strategy and will look only to add supranational, strategic gas storage as a response to the extraordinarily high gas prices of 2021,” BCS GM said in a note. “A tweak to the strategy, not a wholesale change. In short, Europe remains committed to its energy transition, and appears to be looking past natural gas to the (still unproven) hydrogen economy. For our part, we think individual European gas companies are likely to take a different approach for managing the risk of gas prices and will likely increase the purchase of gas under long-term, oil-linked contracts to diversify their price risk at least somewhat.”

Belarus expands its use of the death penalty
18 hours ago
The Mariupol siege is over as the last Azov defenders surrender
1 day ago
Kyrgyzstan: Eccentric health minister fights for his job amid claims of corruption and bullying
1 day ago
Azov commanders have remained behind in the Mariupol steelworks to continue the fight
1 day ago
Russia hopes Chinese carmakers will help revive Moskvitch brand
1 day ago