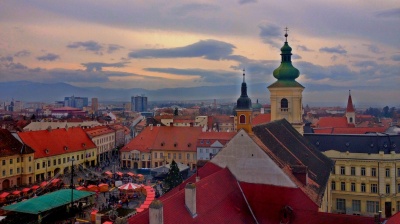 After a successful initial trial in Sibiu (pictured) the project has been extended to Cluj-Napoca.
By bne IntelliNews August 24, 2021

Sniffer dogs deployed at Romania’s Sibiu Airport have detected several passengers infected with coronavirus (COVID-19), under a pilot project that will now be extended, Minister of Internal Affairs Lucian Bode told a press conference on August 23.

Romania is one of a few countries pioneering the use of sniffer dogs to secure its borders against coronavirus as the world attempts to reopen to international travel.

The project was set up by the Sibiu Cynological Centre, which carried out 30 missions at Sibiu Airport, which serves the historic city in Romania’s Transylvania region. Researchers from the centre worked with three police officers and five dogs, successfully identifying several people with the virus. The scheme will now be extended to Cluj-Napoca International Airport as well.

"There will be the same dogs in Cluj and Sibiu, we will choose a few days a week, a few international flights … Romania is among the few countries in the world that has implemented such a project,” Bode told journalists, reported Agerpres news agency.

"I launched a pilot project of the Cynological Centre in Sibiu and I am glad that it had results. 30 missions were carried out at Sibiu Airport with the five dogs and three policemen. The canine specimens reported a total of seven people,” the minister reported.

The project was announced by Sibiu airport in July as a “viable option that could detect imported infections and prevent and reduce the spread of the virus”. Airport officials appealed to passengers to “show openness” and “contribute to the success of the project”.

"With the global spread of COVID-19 worldwide and the need to conduct a real-time examination of the population, especially in crowded places, I believe that this pilot project that will be carried out, for the first time, in Romania at Sibiu airport with the help of canine crews is a reliable tool of prevention and at the same time, an effective measure in terms of health security,” said Daniela Cimpean, president of Sibiu County Council

"We are glad that Sibiu Airport is the first pilot centre of this project in Romania that offers solutions in the joint effort to prevent the spread of Sars-CoV-2 virus. We especially appreciate the efforts of colleagues from the Dr. Aurel Greblea Dog Centre in Sibiu, directly involved in training the canine crew to detect SARS-CoV-2 infection. We hope that this project will have the expected good results and that it can be replicated and developed on a national scale,” said Marius Ioan Girdea, general manager of Sibiu International Airport

Finland was the first country in the world to use dogs to single out passengers that could be carrying the virus, at Helsinki-Vantaa airport. A trial has since been launched at Dubai International Airport, and the use of suffer dogs is also being considered in the UK.