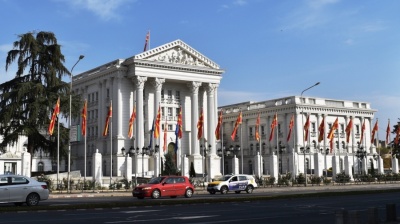 By Valentina Dimitrievska in Skopje November 11, 2021

A real drama took place in North Macedonia’s parliament on November 11 when one of the MPs from the opposition ethnic Albanian party Besa, Kastriot Rexhepi, did not appear at a crucial session. Opposition parties planned to vote on their no-confidence motion against the Social Democrat government led by PM Zoran Zaev, but due to Rexhepi’s unexpected absence they failed to provide a quorum in the parliament.

The opposition parties led by conservative VMRO-DPMNE filed a no-confidence motion against Zaev’s government following the ruling SDSM’s defeat in the recent local elections, after which Zaev announced his resignation, but he did not officially submit it to the parliament. On November 10, the SDSM announced that Zaev will postpone his resignation until the stabilisation of the political crisis amid serious challenges related to the EU integration process.

MPs from the ruling parties did not attend the session on November 11. After the session failed, opposition VMRO-DPMNE's deputy head Aleksandar Nikoloski said that opposition MPs will leave the parliament and called for snap elections.

During the general election in 2020, Besa was part of the SDSM’s coalition, but has now changed sides. Rexhepi had previously signed the document that VMRO-DPMNE leader Hristijan Mickoski showed to the public claiming that he has collected 61 signatures to form a new majority in the parliament and overthrow Zaev's government.

After opposition MPs began to suspect that Rexhepi had mysteriously disappeared or maybe he was kidnapped, Rexhepi gave his explanation via social media.

In a Facebook post, Rexhepi said that one of the main reasons why he did not appear at the session is that he got strong signals from North Macedonia’s strategic partners, the US and EU countries, communicated to him by senior diplomatic representatives, that in December the country is likely to receive a date to launch EU accession talks.

“As a responsible politician and MP, I made this decision not easily, putting the interest of the people and the state in the first place. The state in this important period does not need a political crisis,” Rexhepi said in a Facebook post.

The leader of Besa and the current mayor of Tetovo, Bilal Kasami, reported the disappearance of Rexhepi to the police.

In a statement to the media, he called on the government to find Rexhepi and explain why the MP had not been available in the last 24 hours.

VMRO-DPMNE's leader Mickoski said: “We will wait until midnight for the MP to appear. We must first see if he is alive, healthy and where he is. I think this is a great disgrace for democracy.”

After the opposition launched a search for the MP, who was crucial for the no-confidence vote, Rexhepi published a video clip on Facebook saying: “I am fine and in good health. See you soon!”

The stability and security of the state, as well as the peace and well-being of our people must be most important to us,” Rexhepi added in the video clip.

He added that Kasami and others do not need to worry about him because he is “safe, on the right side, and on the side of all citizens who want peace, stability and democracy.”

“I am with the EU and Nato, and not on the side of anti-Albanians. I am telling you this with a clear conscience, and as soon as threats coming from some of my party’s members are gone, I will answer all media questions. Until then, let freedom and democracy live!” he said.

Bulgaria vetoed the start of EU accession talks with Skopje at the end of last year, but there are hopes that the process might be unblocked at the next EU summit in December.

Regardless of the outcome of the session, Fokus reported on November 10, citing SDSM sources who said Zaev plans to resign from the post of prime minister at the end of this year or the beginning of next year. In the meantime, the party’s central committee should start a procedure to elect a new leader at its next meeting.

The government said that it was concluded at the meeting between Rutte and Zaev that in December there is a key opportunity in terms of the EU enlargement policy towards the Western Balkans.

“It was stressed that the process will not be credible if the progress made by North Macedonia and Albania, which was noted in the October report of the European Commission and the recommendation that the two countries meet the conditions to start EU negotiations, are not confirmed,” the government said, after Rutte met Zaev.