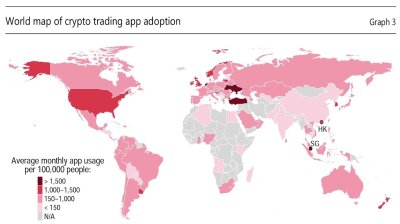 On average, 3% of Turks actively used cryptocurrency exchange apps every day in June, a study published by the Bank of International Settlement (BIS) showed on November 14.

At 3%, Turks took another world number one monthly ranking for crypto trading.

The BIS has compiled data on the daily use of crypto trading apps for 95 countries since 2015.

“Over the period of analysis, crypto exchange app adoption, measured with the number of total downloads per 100,000 people, is highest in Turkey,” the BIS noted.

Turkey also claimed a world record when an average 5% of Turks traded crypto on each day of December 2021, a month that saw the Turkish lira (TRY) crash from the 13s versus the USD to the 18s within a few days.

Table: Each month, Turkey’s rival in trading crypto is essentially Turkey. In May 2021, the UK proved a modest threat to Turkey's top ranking when 2.8% of Britons traded crypto versus 4.5% of Turks.

Across the bne Intellinews news regions, Russians broke their record when 0.83% of them traded crypto on average each day in November 2021.

Turkey holds some intriguing world number one rankings. In September, it took top spot from Brazil for the world’s most expensive iPhones, with the launch of the iPhone 14.

The country is also the regional leader in the bne IntelliNews Despair Index. And it posts the highest or second highest official GDP growth figures in the world. It is also competing to top the global inflation league.

Since 2018, when the lira crashed in a Turkish currency crisis, the country's government has strived to scale down and locally control the financial markets.

Turkey numb with shock as fears grow death toll from two giant earthquakes could climb past 20,000
COMMENT: The new Cold War will be different, and not only because of China
At least 500 dead after huge earthquake hits Turkey, Syria in early hours