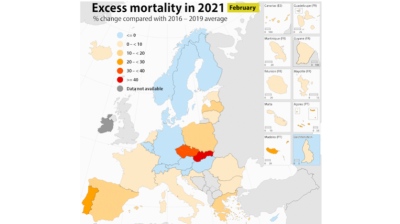 Czechia and Slovakia reported the highest excess mortality rates in the EU in February. Slovakia's death toll increased by 65% compared to the average level between 2016 and 2019, while Czechia posted a 40% growth in excess mortality, according to Eurostat data.

In January both countries posted even worse numbers, Slovakia saw a 73.3% growth in the excess mortality rate and Czechia 52.8%, corresponding to the severe wave of the coronavirus pandemic that hit the two CEE countries.

In contrast, many EU members show a lower February figure in comparison with average numbers.

According to the Czech Statistics Office, a total of 13,500 people died in Czechia in February, up by roughly 3,500 people compared to the average numbers between 2015 and 2019. As the Czech health ministry's data showed, more than 4,000 people with confirmed coronavirus infections died in February.

The situation in both countries seem to be improving and the governments are considering relaxing the restrictions. As of April 20, under 1,300 new positive cases were recorded in Slovakia and slightly above 3,700 cases in Czechia. The total number of deaths from COVID-19 exceeds 28,000 in Czechia and 11,000 in Slovakia.

Russia's inflation slows to 5.5% in April, but uptick still expected

Russia's annual consumer price inflation in April 2021 slowed down to 5.5% from 5.8% year on year in March, according to the latest data from RosStat statistics agency, and in line with the expectations.

Demand for labour is expected to shoot up, as the economy is reopening in quick stages throughout May.

Russia’s foreign exchange holdings soared by $1bn in the last week of April to hit $590.5bn as of May 1

Russia’s foreign exchange holdings soared by $1bn in the last week of April to hit $590.5bn as of May 1, the Central Bank of Russia (CBR) has announced.

Belarus' gold and foreign currency reserves rose 4.9% to $7,2779mn as of 1 May, 2021, according to the preliminary data National Bank of the Republic of Belarus.

Russia's inflation slows to 5.5% in April, but uptick still expected
1 hour ago
Romania’s exports reach all-time high in March
5 hours ago
Poland’s unemployment grows 0.5pp y/y to 6.3% in April
5 hours ago
Russia’s foreign exchange holdings soared by $1bn in the last week of April to hit $590.5bn as of May 1
6 hours ago
Belarus' gold and foreign currency reserves rose 4.9% to $7.3bn as of May 1
12 hours ago